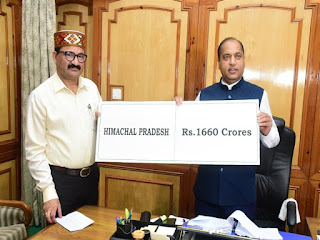 The Chief Minister said that this fund was lying pending with for last about ten years with the CAMPA and the matter was vigorously raised with the government of India to release this amount at the earliest. This amount would be spent on various focus areas like plantation, soil and water conservation, forest infrastructure development, wildlife activities, afforestation through school children, lantana eradication, monkey sterilisation programme etc. This fund would also go a long way in increasing the livelihood of the people of the state, he added.

Jai Ram Thakur said that the state government was resolute to preserve the forest wealth, environment and increasing the green cover for which various efforts were afoot.

Govind Singh Thakur thanked Prime Minister for passing of Compensatory Afforestation Fund (Accounting Procedure) Rules, 2018 in the parliament as a result of which this big amount has been released to Himachal Pradesh after a long interval.

He said that three committees have been constituted for proper utilisation of this fund including executive committee at primary level headed by Principle Chief Conservator of Forests for initial evaluation of APOs, steering committee headed by the Chief Secretary for evaluation and submitting the APOs for approval  of the government of India and the governing body constituted under the chairmanship of the Chief Minister for taking policy decision for utilisation of this fund for various development activities.

The Minister said that the as per the new provisions of the Act, this amount would be deposited in public account instead of consolidated account and the state government would continue to get interest of around Rs. 100 crore per annum and moreover, this fund would not lapse at the end of the financial year.