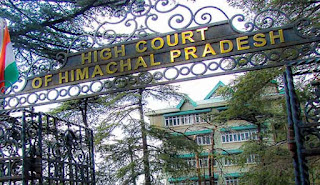 SHIMLA-------Examining the follow up of the directions issued by the Court in a LPA judgment regarding willful absence/latecoming of teaching/non-teaching staff from schools, the High Court of H.P., asked the Director of Elementary Education and Director of Higher Education to keep in mind that Education is a fundamental right and the citizens should not be deprived of such valuable right guaranteed to them by our Constitution on account of administrative inefficiency, indiscipline, lack of infrastructure, teachers and other staff in the schools situated in the State.

These orders were passed by the Division Bench comprising of Justice Dharam Chand Chaudhary and Justice Jyotsna Rewa Dua, while perusing the compliance of the directions issued in the judgment rendered in an LPA. The said LPA was filed by one Babita Thakur, Lecturer on whom the penalty of "dies-non", was imposed for being absent from school on 18.11.2004. Thirteen teachers including the appellant-writ petitioner, were found absent from duty, on surprise checking conducted on 18.11.2004 at 10 A.M, by the Deputy Director(Education) and the explanation of the Principal and individual teachers was called. The appellant explained that her maid did not come to her house and no one was there to look after her child, which was not accepted by the competent authority. Babita Thakur, filed a writ petition which was dismissed and she challenged the judgment dated 3.5.2011 passed by Single Judge, by way of LPA. The Division Bench agreed with the view of the Single Judge and dismissed the LPA.

To put a check on the increasing matters of willful absence/latecoming of teaching/non-teaching staff from schools, while dismissing the LPA, the Court directed the Director of Elementary Education and Director of Higher Education to apprise the Court, by way of affidavit, as to whether any mechanism exists in the Education Department for regular/surprise checking of the schools by the officer(s) authorized to do so, and if so, to submit the details of regular/surprise checking so conducted by such officer(s) during the years 2017 and 2018. The Court had also directed to furnish the number of teaching/non-teaching staff found absent from the schools in violation to the provisions contained in the Leave Rules and to apprise the action taken against the teaching/non teaching staff including the Principal(s)/Headmaster(s) responsible to maintain discipline and decorum in the School.

In compliance to the aforesaid directions, the Directors furnished affidavits, time and again, but the Court being dissatisfied by the affidavits directed them to furnish fresh affidavits. On the compliance report filed through fresh affidavits, the Court was satisfied with the progress made in the matter and passed the aforesaid orders and said that it is essentially required to improve the standard of education in the government schools which at one point of time used to be very hight due to sincerity, dedication, devotion and honesty of the teachers, who in real sense, were "GURU" and being rightly called so.

The Court also directed to communicate the orders to the Chief Secretary to the Government of H.P. to ensure the improvement of standard of education in the Government schools so that the students and parents repose faith in the system.