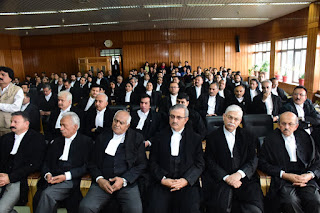 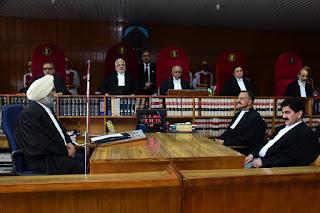 Speaking on the occasion, Justice V.Ramasubramanian, Hon'ble the Chief Justice said that Shri M.S. Chandel was not only a great legal luminary, having in-depth knowledge of all branches of law, I.e. civil, criminal and constitutional law, but he was also a man of principles. Justice Ramasubramanian said that the law reports bear ample testimony to his legal acumen and his arguments used to be simply brilliant. The Chief Justice expressed his deep condolence to the bereaved family and said that sad demise of Sh.Chandel is a great loss to the bereaved family as well as to the legal fraternity as it has lost a role model.

Born on December 15, 1933, he did his matriculation from Government Boys High School, Bilaspur in the year 1951, Graduation from Government College, Ropar, Punjab and LLB from Punjab University in the year 1957. He practised at Subordinate Courts Ghumarwin, District Bilaspur from 1957 to 1959. He joined as Prosecution Sub Inspector on 22nd June, 1959 and was appointed as Assistant Advocate General, State of Himachal Pradesh, in the year 1981. Shri Chandel became Deputy Advocate General in the year 1991 and retired as such on 31.12.1991. From 1992, he plunged into active practice and made a mark as a lawyer of great learning. Thereafter, he was appointed as the Advocate General of Himachal Pradesh and served as such, w.e.f. 7.3.2003 to 2.1.2008. He had completed 32 years 6 months and 9 days of service in Government Sector. Sh.M.S.Chandel was designated as a Senior Advocate in the year 2003.

The Registrar General Sh. Virender Singh conducted the proceedings. The Registrars of the High Court and a large number of Advocates and staff members were also present.