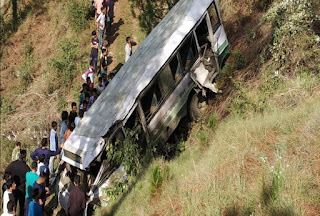 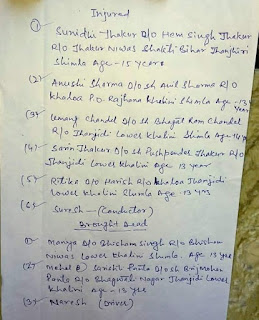 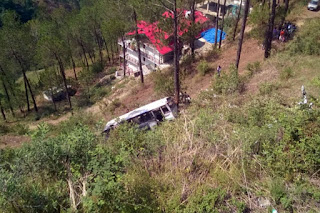 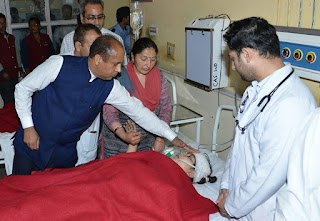 Vijyender Sharma
SHIMLA------In a tragic incident from Himachal Pradesh, a bus ferrying school children fell down a deep gorge in the state capital, killing three, including two children. The driver of the bus died on the spot.

Five children, all from the Jesus & Mary (Chelsea) school, and the bus conductor, were injured in the incident. They have been rushed to Indira Gandhi Medical College (IGMC), Shimla.

The deceased have been identified as Manya D/O Bhisham Singh, Sarishti Panta (Mehul) D/O Brijmohan Panta, both aged 13 years, and bus driver Naresh. They were taken to a local hospital where they were declared brought dead by the doctors.

The bus was hired by the school from the Himachal Road Transport Department (HRTC) department and had 12 persons onboard.

The accident took place in Jajheri (Lower Khalini) in Shimla on early Monday morning. Primary reports suggest that the bus fell off the road while trying to negotiate past the vehicles parked alongside the narrow road.

The area has a narrow road, often constricted by parked vehicles on both sides. Besides, no crash barriers or parapets have been installed on the road which was constructed about 20 years ago.

The locals had been demanding the installation of parapets and crash barriers for a long time, but the politicians and the authorities failed to address the concerns.

Meanwhile, angry over the incident, locals smashed the window panes of the vehicles parked alongside the road. Education minister Suresh Bhardwaj, who visited the spot, had to face the ire of the people and was quickly escorted back in SP's vehicle. The locals also pelted stones on media persons covering the incident.

Last week, Suresh Bhardwaj had ordered the private schools to arrange for their own school buses as the HRTC buses would be pressed into service on local routes to solve the menace of overloading.

Notably, 46 people lost their lives in Banjar of Kullu district on June 20. Overloading is considered to be the primary reason behind the accident. A magisterial inquiry was set up to look into the accident and it submitted its report to the government. The contents of the report haven't been made public.