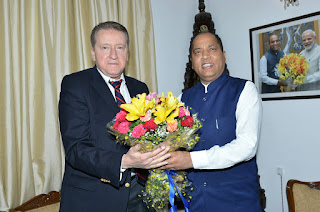 Speaking on the occasion, the Chief Minister said that Russia and the state of Himachal Pradesh have several similarities, both topographically as well as culturally. The Roerich Art Gallery established at Naggar in Kullu district by great Roerich was testimony to the fact of Indo-Russian friendship. He said that the Russia and Himachal Pradesh could cooperate in various fields such as tourism, agriculture and disaster management etc.

While apprising the Russian Ambassador to India regarding the proposed Global Investment Meet being held at Dharamshala during the month of November this year, the Chief Minister said that the main aim of this meet was to showcase the immense investment potential of the state and harness it with the participation of the interested entrepreneurs.

He also invited Russia to participate in this mega event.  He said that Himachal Pradesh and Russia could collaborate in sectors such as agriculture, horticulture, food processing, eco tourism etc.

Nikolay R. Kudasheva said that Russia was keen to cooperate with Himachal in cultural exchange, tourism and adventure sports. Russia would also ensure its active participation in the Global Investors Meet. He invited Chief Minister to be part of  Roerich celebrations at Roerich Art Gallery, Naggar during the month of October this year.