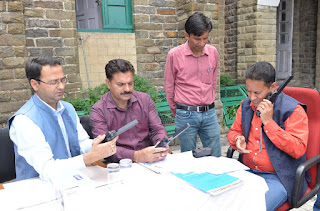 Speaking on the occasion, Onkar Chand Sharma said that the state government has added a layer of satellite phones to improve the emergency communication learning from the experiences of monsoon 2018 and winter 2019 where the communication system was badly affected. He said that now the state has 65 ISAT (satellite phones) out of which 28 are with Disaster Management department at state, district headquarters and remote/difficult Sub-Divisions namely Kaza, Udaipur, Pangi, 7 at tribal locations in Kinnaur district whereas Police has 37 ISATs throughout the state.

The Principal Secretary said that the state government has issued detailed Standard Operating Procedures (SOPs) for maintenance and up keeping of these satellite phones and their availability during disaster situation.

Onkar Sharma also shared that in the coming days the state government would be adding 8 more ISAT phones on the black out zones on Manali-Leh route with the help of an organization Pragya (under their project with Royal Enfield). Besides this, some more ISAT phones on the requisition received from the Deputy Commissioners for providing the ISAT phones in tribal and remote areas of their respective district will also be added, he said.