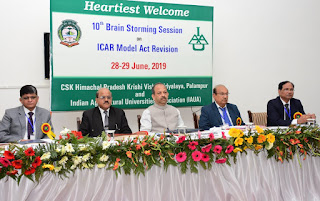 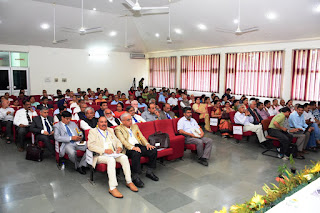 Dharmshala----.B.K.Agarwal, Chief Secretary, Govt. of H.P, said that innovative solutions should be devised to improve farm education and asked farm universities to think out of box to double the income of farming community. The Chief Secretary was addressing Vice-Chancellors after inaugurating a two days brain storming session on 'Indian Council of Agricultural Research (ICAR) Model Act Revision' at CSK Himachal Pradesh Agriculture University, here today. The event has been jointly organised by the University and Indian Agricultural Universities Association (IAUA).

Mr B.K. Agarwal said that problem of hunger has been solved by farm universities but new challenges have emerged. "Decreasing productivity, increasing input cost, farmers' distress, environment degradation due to excessive use of chemicals, depleting water table, etc. were major issues which need immediate attention. The farm scientists and all concerned should join hands to resolve all such issues", opined Mr Agarwal. He said that farm education should be reoriented as graduates need to serve the farmers, especially needy and poor farmers. He said that this issue required critical thinking as per the needs of country than copying from foreign lands. Some drastic changes can be brought forward by thinking out of the box.

The Chief Secretary advised that farm students should spend adequate time with farmers to gain practical knowledge and enhance their skills. He also asked scientists to frequently interact and involve farmers while taking major policy and other decisions. He told that the Govt of H.P. was advocating zero budget natural farming and asked all farm universities in the country to help farmers in doubling their income.

Dr.A.R.Pathak, President, IAUA and Vice-Chancellor, Junagarh Agriculture University, Junagarh said that common syllabus and rules among all farm universities were necessary to improve quality of education. He said that all state governments should adopt ICAR Model Act to maintain uniformity in quality of education and uniformity in the administrative set-up. This will be very good for the states and nation. He also advocated increasing the tenure of Vice-Chancellor from three years to five years. Dr.Pathak advised that all farm universities should provide the farmers with holistic technologies

Dr.S.K.Patil, Secretary General, IAUA and Vice-Chancellor, Indira Gandhi Agricultural University, Raipur said that no country can survive without food and there was need to continuously increase food production. He told that national education policy has been launched recently and farm education investment will be doubled in the next five years. All universities were becoming multi-faculty and farm universities have to to plan and think on this crucial issue.

Prof Ashok Kumar Sarial, Vice-Chancellor of the host University told that the event was being held for the first time in the University since its inception. He underlined the need to make the ICAR Acts more appropriate, effective and useful for  the improvement of teaching, extension and research in the farm universities. Prof Sarial also elaborated major achievements of his university in helping the state to become self sufficient on food front. He said that teachers should to be recruited on regular basis with full scale to attract best talent.