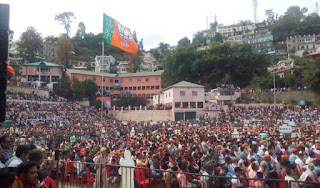 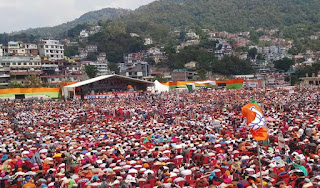 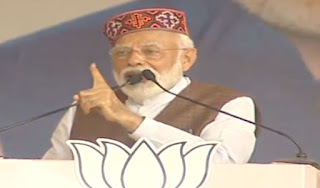 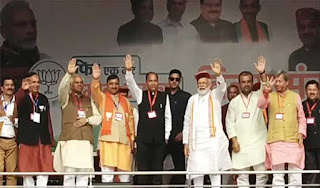 SHIMLA-----Addressing his second election rally today in the Solan constituency of Himachal Pradesh, Prime Minister Narendra Modi attacked the Congress' endemic corruption and political nepotism which significantly hampered the nation's progress and asserted that the Opposition's election agenda rested upon personal abuses while the BJP's election agenda was about making India stronger.

PM Modi launched a scathing attack on the Congress and said, "The Congress and its leaders are campaigning in these elections to hurl personal abuses at me and ruin my image in the country. However, Modi's campaign in these elections is all about enhancing India's image internationally, no matter how much they abuse this 'Chowkidar.' It is quite ironic that those that are themselves out on bail for their illegal and corrupt actions are abusing and questioning me. The people of the country clearly remember the poor track record of governance during the UPA days which led to massive corruption, double-digit inflation and severe distress for farmers."

Describing how the BJP governments in the Centre and state have worked towards strengthening the local economy in Himachal, PM Modi said that in comparison to previous UPA governments, defence manufacturing in India had increased by 80 percent with a similar rise seen in mobile and other equipment production as well. He described how the e-NAM (National Agriculture Market) had played an important role in ensuring better prices and efficient of farmers' produce in Solan and surrounding areas and applauded the state government's efforts at boosting tourism with the construction of Shimla airport and new train coaches in Himachal Pradesh.