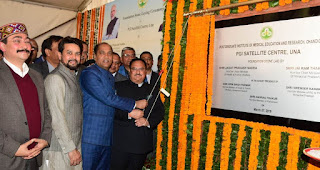 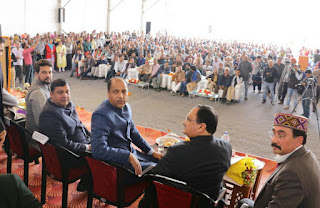 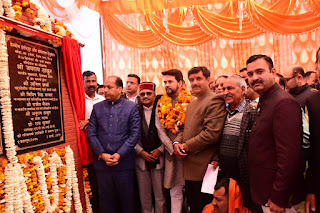 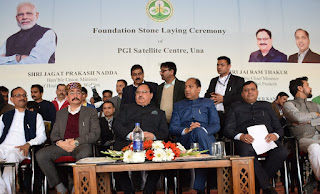 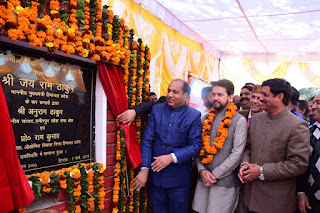 SHIMLA----   Chief Minister Jai Ram Thakur and Union Health Minister J.P. Nadda today laid foundation stone of PGI satellite Centre at Malahat in Una district to be completed by at a cost of Rs. 480 crore. The Centre would be ready in next about 40 months.

Speaking on the occasion, the Chief Minister said that this institute would ensure world class health care facilities to the people of the State which would have 300 bed capacity and specialised healthcare facilities at par with the PGI, Chandigarh.

Jai Ram Thakur said that the State Government would provide all possible facilities and help for time bound completion of this ambitious project. He said that the Union Government has launched Ayushmann Bharat Yojna for the people of the country for providing insurance cover of Rs. 5 lakh so as to ensure that the poor patients were not deprived of specialised health care facilities due to want of money. The State Government has also launched Him Care scheme to provide insurance cover to those families who have been left out from Ayushmann Bharat Yojna. The beneficiaries have to contribute Rs. 1000 per annum to avail Rs. 5 lakh insurance benefit.

The Chief Minister said that in the budget for the year 2019-20, the State Government has launched 'Sahara Scheme' for chronic illness patients under which financial assistance of Rs. 2000 was being provided per month to the family for ensuring better care of the patients. He  said that the State Government has completed a year and  two months in office and during this period he has visited every Vidhan Sabha Constituency of the State to understand the developmental need and aspirations of the people of the State.

Jai Ram Thakur said that the strong leadership of Prime Minister Narendra Modi at the Centre has ensured that India emerges as the world power. He said that due to this the Pakistan today stands isolated and frustrated after the Pulwama terrorist attack and Surgical strikes by India on terrorist camps in PoK. He said that handing over of Wing Commander Abhinandan to the country by Pakistan speaks of the strong and dynamic leadership provided by Narendra Modi.

Union Health Minister Jagat Prakash Nadda said that the Union Government has ensured that the State get developmental projects worth crores of Rupees for ensuring that the State becomes the most progressive State of the country. He said that 'impossible' was now 'possible' under the strong leadership of Narendra Modi. He said that with the opening of the Centre, now the people of the State would not have to go to PGI for getting specialised healthcare facilities.

Shri Nadda said that the Rs. 1352 crore AIIMS was coming up in Bilaspur district which would be completed within the next two years. He said that hundreds crore of Rupees have been provided for different  medical colleges  of the State to ensure specialised health services to the people of the State. He said that over 14.50 lakh people have been benefitted till date under the Ayushmann Bharat Yojna which was covering about 50 crore population of the country. He also detailed several schemes launched by the Union Government for providing free treatment to the patients with several chronic diseases.

Rural Development and Panchayati Raj Minister Virender Kanwar said that the Chief Minister was always concerned towards the welfare of the common man and always endeavouring for their betterment.

Member of Parliament Shri Anurag Thakur said that this Satellite Centre of PGI would prove a boon to the people of the region in getting world class health care facilities nearer to their homes. He said that the State Central Government has also sanctioned AIIMS for the State which would be constructed in next two years in Bilaspur district. He said that pace of development in the State has been accelerated in the last about one year under the able leadership of Chief Minister  Jai Ram Thakur.

Director PGI Chandigarh Dr. Jagat Ram welcomed the Chief Minister and other dignitaries present on the occasion. He said that the Centre would have all the facilities at par with the PGI Chandigarh.

He also laid foundation stone of Hostel and inaugurated  Solar System of HIMCAPES Badhera which would be completed by spending an amount of Rs. 7.50 crore.