People from all walks of life greets CM on his birthday 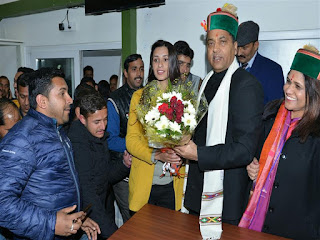 People from all walks of life greets CM on his birthday

SHIMLA---Chief Minister Jai Ram Thakur today celebrated his 54th birthday with simplicity with the people from all walks of life visiting his official residence 'Oak Over' early in the morning and extended their good wishes on his birthday.

The Chief Minister received greetings on his birthday from President of India and his counterparts of different States, Union Ministers, senior party leaders and ministers of various States.

Jai Ram Thakur distributed blankets, shoes and jackets to the needy on his birthday during an event organized by the Shimla Mandal Bhartiya Janta Yuva Morcha (BJYM) members near Shimla Club.

He also visited cancer hospital Shimla and distributed blankets to the patients.

Jai Ram Thakur thanked all for their birthday greetings, especially the people of Himachal Pradesh who had always been extending their overwhelming support to the state government for making Himachal Pradesh as one of the leading state of the country in all major sectors.