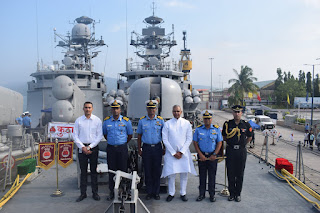 During the visit, the Governor was briefed by Commander Deepak Bali, Commanding Officer, INS Kulish about the role and capabilities of the ship. He was taken around the operations room of the ship wherein a combat drill for anti-surface and anti-air engagement including training of weapons was demonstrated to him. He was also taken around the navigation bridge and the helicopter landing deck wherein he was briefed about the nuances of navigation and helicopter operations at sea.

The Governor expressed his admiration for the challenging role displayed by the Naval Component towards safeguarding the eastern sea front. He also appreciated the high state of operational readiness of the ship and conveyed his best wishes to the entire crew of INS Kulish.