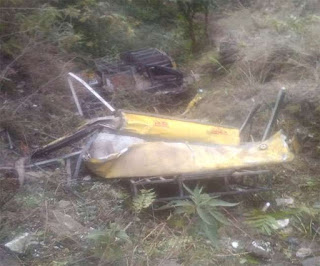 The Governor said it was a tragic incident in which six innocent school children lost their lives. He prayed to the Almighty to give peace to the departed souls and strength to the bereaved family members. He wished speedy recovery to  the injured children.

Jai Ram Thakur said he was saddened over the accident in which seven precious lives including six children have been lost. He expressed his heartfelt condolences with the bereaved family members and prayed for the peace of the departed souls. He wished speedy recovery to the injured children who have sustained injuries in this accident.

The Chief Minister has directed the district administration to provide best possible assistance to the families who lost their near and dear ones in this accident. He also directed to ensure provide best medical treatment facilities to the injured children.

Transport Minister Govind Singh Thakur has also mourned the death of school children and bus driver in this accident. He expressed his heartfelt condolences with the bereaved family members.

As per the reports received at the state headquarters, the bus of Dadahu Aadarsh Vidya Niketan school carrying 18 school children skidded off the road near Khadkoli on Dadahu-Sangrah road at around 8 AM. Three school children and the bus driver died on the spot whereas three other children were reported to be brought dead at Nahan civil hospital. Five seriously injured children have been referred to PGIMER, Chandigarh whereas seven others have been hospitalised in Nahan hospital.

The district administration provided immediate relief of Rs. 20,000 each to the family members of the deceased and Rs. 10,000 to the injured. Besides, the Deputy Commissioner also provided Rs. 50,000 from the Red Cross Fund to the injured, who have been referred to PGIMER, Chandigarh.