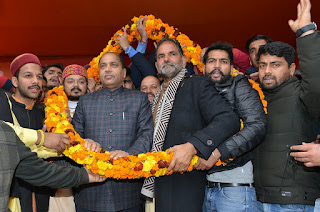 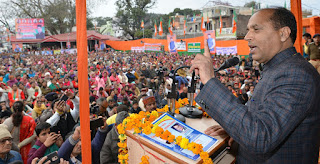 SHIMLA-----Chief Minister Jai Ram Thakur announced to upgrade CHC Rehan in Kangra district to 50-bedded civil hospital and said that Rs. 51 crore detailed project report prepared under BRICS would be posed for funding in second phase for solving the water problem of Fatehpur area. He was addressing a largely attended public meeting at Rehan on Sunday.

He said that the state government has lowered the age for getting old age pension from 80 years to 70 years benefitting about two lakh old people who were now getting pension of Rs. 1300 per month. He said more than 22,00 grievances had been redressed under Jan Manch in which opposition leaders were also turning up. The Grihini Suvidha Yojna has emerged as a big success and so far 35000 families had been provided free gas connection. He said that in addition Him Care scheme has been launched to provide health cover of Rs. 5 lakh to the people of the state left out from Ayushman Bharat Yojna of the Union government.

The Chief Minister said that the state government has stated Mukhya Mantri Swavlamban Yojna for providing subsidy up to 30 per cent to start their self employment venture with an investment of Rs 40 lakh. He said that several posts were being created at filled in each Cabinet meetings. The government has provided financial assistance of about Rs 10 crore to the needy from the Chief Minister's Relief Fund during the last one year.

He said that the opposition make much issue regarding his Delhi visits, but now when the state government has succeeded in getting development projects worth Rs. 9500 crore, they have nothing to say. He said that opposition neither has a vision nor they have leader.

The Chief Minister said that the State Government would take up the matter of rehabilitation of Pong Dam oustees with the Rajasthan Government at the highest level and a permanent solution would be sought soon.

He announced to start M.Com and MSc Physics classes at Government Degree College Dehra and construction of a bridge to connect Sakri village. He said that matter of opening of Sub-Tehsil at Raja Ka Talab would be considered sympathetically. He also announced Rs 10 crore for construction of Mid Himalaya Community Centre.

He laid foundation stone of combined office building (Mini Secretariat) at Fatehpur to be constructed at a cost of Rs 12 crore.

Former MP Kripal Parmar said that the people of the area has give their prime land for construction of the Pong Dam, but even today they were still  awaiting rehabilitation. He urged the Chief Minister to take up the matter with the Rajasthan Government for proper rehabilitating the people ousted due to this dam. He also urged the Chief Minister to develop the area from tourism point of view.