Supreme Court's verdict on Rafale case a victory of truth and a slap on face of Congress: CM 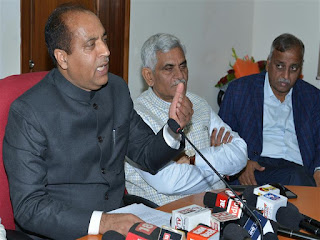 Supreme Court's verdict on Rafale case a victory of truth and a slap on  face of Congress: CM

SHIMLA---The verdict of Hon'ble Supreme Court in Rafale case was a victory of truth and it was a slap on the face of Congress which was engaged in politics of falsehood and propaganda and misleading the people of the country on the  Rafale Deal. This was stated by the Chief Minister Jai Ram Thakur while addressing a Press Conference  today.

The Chief Minister said that the verdict has fully exposed the Congress party and its President Rahul Gandhi, who in over enthusiasm was racking up this issue in a desperate attempt to divert the attention of people of the country from the development that Nation has witnessed under the dynamic and able leadership of Prime Minister Narendra Modi.

Jai Ram Thakur said that the BJP led  NDA government at the Centre took a big decision of Rafale Deal in the interest of the country, this decision of national interest was not liked by Congress and few others who resorted to playing gimmicks by finding unnecessary loopholes. He said that this deal was to be finalised way back in 2007, but even after eight years of Congress rule in the Centre they could not take any decision in this regard. Was this delay due to the fact that the Congress Government could not get commission from the middlemen in this deal, he asked the Congress leaders.

Chief Minister said that the Congress has resorted to such a big lie in the Rafale Deal just to fulfil their political motive and have played with the emotions of people of the country, for which the people will never forgive them. He said Congress chief was defaming the Central Government on Rafale Deal, but now the decision of Supreme Court has shown the mirror to his baseless allegations. He said that this is a severe blow to the Congress and especially Rahul Gandhi, who should learn a lesson from this.

Jai Ram Thakur said that it was unfortunate that the Congress President has failed to maintain basic decency in his statements and public utterances. He said that over exited by the results of recent assembly elections in the three states, Rahul Gandhi was giving unmindful and misleading statements. He advised the Congress President to come out from the imaginary world and acknowledge the fact that the people of the country have full faith in the leadership of Prime Minister Narendra Modi and his political wisdom.

Jai Ram Thakur said that the Congress has tried to demolish the country's reputation by false propaganda on the Rafale Deal and the people of the country would give the Congress a befitting replay in the coming Lok Sabha elections in 2019. He said that during the four and a half year term of the present Union Government, the Congress party has desperately tried to rake up one issue or another against the present Government, but has always failed as the people of the country were well aware of their nefarious designs and ulterior motives.

The Chief Minister said that Narendra Modi has an honest image, those who tried to defame him have now been exposed. Modi is not only a popular leader of the country, but all the developed countries of the world are also recognizing him as a world leader. Due to his growing popularity, the so-called big leaders of the Congress have indulged in false propaganda to mislead people of the country and have restored to big lies on Rafale deal with sole objective of political selfishness.