Panna Pramukh Sammelan to be held with enthusiasm in Solan 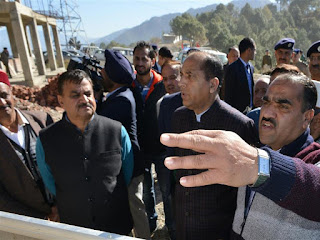 Panna Pramukh Sammelan to be held with enthusiasm in Solan

SHIMLA----After the marginal victory of Congress in the recently concluded assembly elections of three states of the country, the Congress leadership both at Centre and the State in over enthusiasm and are crossing all limits of decency and using un-parliamentary  language, which was unfortunate and uncalled for. This was stated by the Chief Minister Jai Ram Thakur while interacting with the media at Police Ground Solan today.

The Chief Minister said that the Congress leaders should have in mind that even today the BJP governments in 16 states of the country, serving the people with devotion and energetic manner besides at the Centre and the nation was forging ahead on the path of progress and prosperity under the dynamic leadership of Prime Minister Narendra Modi. He said that the first time Congress MLA Vikramaditya Singh yesterday in a press conference at Shimla has used such a language against the state leadership, which shows his political immaturity and lack of knowledge regarding state and national politics.

The Chief Minister said that the state government during its one year tenure has ensured development of all areas of the state and welfare of every section of the society was being ensured. He said that the government also succeeded in getting developmental projects worth about Rs. 10,000 crore sanctioned for the state from the Centre. The one year celebrations of present state government would be celebrated at Dharmshala, in which Prime Minister Narendra Modi would be the Chief Guest. He said that it was due to the benevolence of the Prime Minister that today the state was emerging a front runner state in matter of development in the country.

Later the Chief Minister also inspected the ongoing construction works of Circuit House at Solan and HPTDC Hotel Kiari Bangla near Waknaghat in Solan district. He directed the officers to ensure time bound completion of these works.