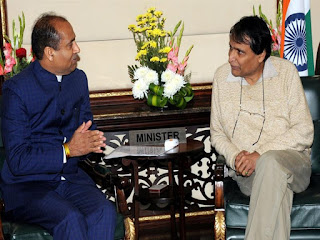 He thanked the Union Minister for conducting OLS survey for proposed Airport at Mandi. He said that 700 acres of land, out of which 640 acres private and 60 acres government land has been identified at Naagchala for airport construction. He said that Mandi is the central point of the state and is the gateway to border area, therefore strategically important place. He added that there were defence airports at Pathankot and Chandigarh only till now so construction of airport at Mandi can be helpful for defence forces also.

Chief Minister urged Suresh Prabhu for providing speedy clearance for construction of airport besides providing budget for the same.

He also sought assistance for launching Udaan 2 in the state soon so that connectivity gets strengthened and tourists can reach state in more numbers and at affordable rates.

He also requested for expansion of Shimla airport.

Union Minister assured of all possible assistance to the state on the discussed issues and directed the officers to do the needful.