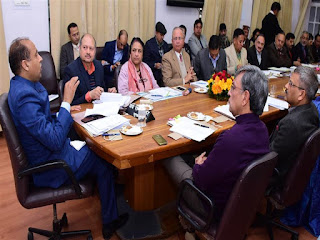 SHIMLA----   Chief Minister Jai Ram Thakur has directed all the departments of the state government for taking effective steps to reduce the footfall of citizens in the government offices by suggesting simplification of Acts, rules, regulations, schemes and procedure of online applications.

He was presiding over the meeting of senior officers of all the departments held here today regarding implementation of budget assurance to review the existing Acts, rules, regulations and schemes for their efficacy, relevance and simplification.

The Chief Minister directed the departments to review all the existing parameters of schemes being implemented by them and bring the matter before the Cabinet with suggestions regarding required simplification or changes in procedure.

Jai Ram Thakur said that state government is committed to ensure ease of living of the citizens and the Jan Manch has proved to be very useful in ensuring the redressal of public grievances at their door-steps. He stressed the need to develop a parallel digital mechanism to create awareness among the masses up to the grass root level about the welfare schemes and policies of the government. It would also help in reduce the need of people to visit the government offices as they would be able to settle their issues online.

He emphasized that all the departments should encourage the people for using online services for redressal of their grievances and paying bills, obtaining revenue and other certificates besides submitting their applications for different purposes. He also directed the Information Technology department to develop a system to bring apps of all the departments under one umbrella for the facility of the citizens.

While reviewing the progress of health department, the Chief Minister suggested that in order to facilitate the attendants of the patients, the chemists should be contacted for supplying the medicines to the patient admitted in the hospitals. The telephone numbers of the chemists should be displayed in the hospitals up to district level. Besides, the department should also work out to provide medical examination reports to the patients through e-mail or Whatsapp.

The departments apprised the Chief Minister regarding the action taken on this budget announcement and the success achieved so far in reducing the need of the people to visiting government offices.

Additional Chief Secretary Dr. Shrikant Baldi conducted the proceedings of the meeting and urged all the departments to increase online services to bring footfall in the government offices up to the lower level.