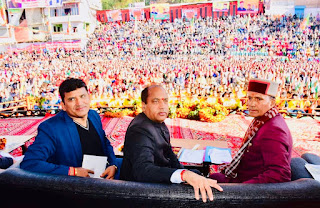 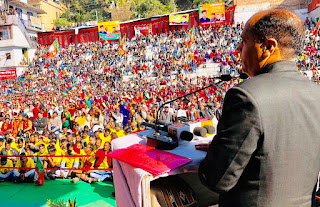 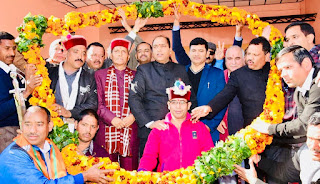 Announces opening of ITI at Ladbhadol, Sub Tehsil at Makreri and taking over of Private B. Pharma College Jogindernagar
Vijyender Shatma

Jai Ram Thakur said that the sole aim of the Government was all-round development of the State. He said that in the very first cabinet meeting, the present government decided to lower the age limit of old people to get social security pension without income limit criteria from 80 years to 70 years. He said that on this single decision the State Government was annually spending about Rs. 250 crore. It was a historic decision as every previous government in the State in their first cabinet meeting used to make politically motivated decisions, he added.

Chief Minister said that Jan Manch was another flagship programme of the State Government which has emerged a boon to the people of the State for the redressal of their grievances. He said that about 20000 grievances had been redressed in six Jan Manch conducted in different parts of the State. He said that it was unfortunate that a few opposition leaders were making much hue and cry over his use of helicopter. He reminded these leaders that he was using the helicopter for development of the State and not for his personal use as it was done in the previous tenure.

Jai Ram Thakur  said that recently he undertook aerial survey of Pathankot-Jogindernagar railway line with the Union Railways Minister. He said that the Union Minister assured him that this track would be upgraded so that travelling duration between Pathankot and Jogindernagar could be reduced from existing nine hour to six hours. He said that transparent roofed coaches would also be provided on trains plied on this route. He said that the State Government was also endeavouring to construct an International Airport in Balh area in Mandi district.

Earlier the Chief Minister inaugurated Water Supply Scheme Shanan, Drahal, Makreri and Chaterbhuja in Jogindernagar Tehsil constructed at a cost of Rs. 1.62 crore. This scheme would benefit over 4100 people of 11 villages.  He also inaugurated augmentation of Lift Water Supply Scheme Dhoagon, Pipli and Kuthera constructed by spending an amount of Rs. 1.44 crore which would benefit about 3000 people of 12 villages.

Chief Minister laid foundation stones of Flow Irrigation Scheme    Asa-Ropa-Har and Jimjima Kuhal and of LWSS to partially covered habitation of Gaduhi and Bhora to be constructed by spending Rs. 1.92 crore and          Rs.  76.21 lakh respectively.

Various social, political and cultural organisations honoured the Chief Minister on the occasion.

Irrigation and Public Health Minister Mahender Singh Thakur said that it was an historic event for the people of the Mandi as for the first time Chief Minister was elected from Mandi. He said that out of the ten MLA in Mandi district, nine were BJP candidates and the tenth one was also associated to the BJP. He said that Rs. 4751 crore Irrigation Project has been sanctioned for the State by the Union Government. This would help in doubling the farmer's income by 2020, he added. He said that Rs. 1688 crore horticulture project has been sanctioned for the State for horticulture development of lower areas of the State.

Member of Parliament Ram Swaroop Sharma said that it was due to the benevolence of Prime Minister Narendra Modi and due to effective persuasion of the State Government that Central projects worth crores of Rupees were sanctioned to the State during this short period of about eleven months.