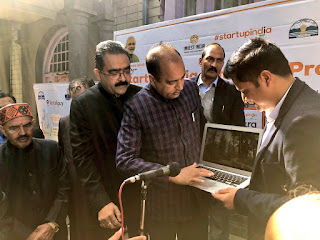 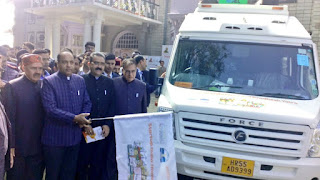 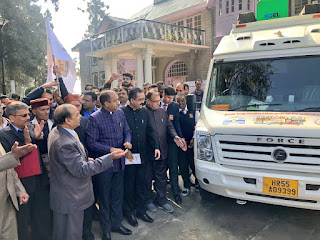 SHIMLA----      Himachal Startup was poised turn the educated youth from job seekers to job providers and in order to give support to the 'startup' and 'innovation projects' the state government would provide all possible assistance to the youth to develop entrepreneurship.

This was stated by the Chief Minister Jai Ram Thakur while flagging off the 'startup Yatra' van for the state from his official residence Oak Over, here today.

The Chief Minister said this scheme is a gift of Prime Minister Narendra Modi to the youth of the country which envisages various incentives for startups so as to enable the entrepreneurs to succeed in their ventures. This scheme would provide an opportunity to the youth to carry forward their innovative to next level where they could be transformed to reality. He said that this Yatra would visit various educational institutions of Shimla, Solan, Sirmour, Hamirpur, Kangra, Chamba, Kullu, and Mandi districts. The Yatra would culminate at IIT, Mandi on 30th November.

Jai Ram Thakur said that basic objective of this scheme is to create self-employment and employment, upgrading the skills of entrepreneurs and to provide them support to set up their units under professional guidance. The scheme also aims at helping and holding entrepreneurs to select viable projects in the potential areas in manufacturing and service sectors and training them to set up startups and running them professionally.

The Chief Minister also launched the first startup of the state    'localguy.in' developed by Anuj Sharma.

Industries Minister Bikram Singh Thakur also spoke on the occasion and urged the students to come forward with innovative ideas to start up their own ventures.