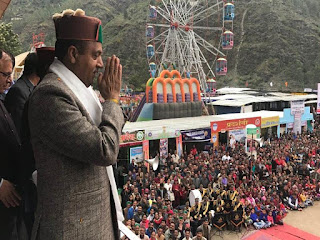 Announces to open office of Tehsil Welfare Officer at Nankhari

SHIMLA---Chief Minister Jai Ram Thakur while presiding over the closing ceremony of the four-day long international Lavi fair at Rampur Bushahr in Shimla district , said that fairs and festivals are the inseparable part of the people of the state which highlight our rich traditions, customs and culture.

He said that Lavi fair besides being historical is also known for its trade with Tibet, China and other countries. He said the state government is committed to promote the fairs, culture and customs of the state in a big way.

The Chief Minister made announcements of developmental works worth crores of rupees for the area. He said office of the Tehsil Welfare Officer will be opened at Nankhari and the matter would be taken up with the government of India for declaring Tikkar-Khamadi-Khanog-Nirath road as national highway. He announced that science classes would be started in GSSS Khunni from next academic session and upgrading GPS Matrewal.

He also announced to provide funds for various link roads in the Rampur Bushahr Assembly constituency.

Jai Ram Thakur distributed the prizes to the best stalls of handicraft and handloom put up by various self-help groups during the fair.

He inaugurated science block of government senior secondary school, Nogli and Ayurvedic hospital at Rampur Bushahr and laid foundation stone of road from Chakti to Dadara.

Earlier, the Chief Minister was accorded warm welcome on his arrival at Jhakhri by people in large number from various panchayats of the area. He visited the Jhakhari power house and talked to the senior officers of this mega hydropower project.

On the demand of the local people, he assured to open primary health centre at Jhakhri whereas the departments concerned would be asked to solve the drinking water problem and undertaking maintenance of roads in the area. He announced to rupees three lakh each to Shantinagar, Garkahan and Satluj Mahila Mandals for construction of Mahila Mandal Bhawans.

He also dedicated the building of Police Post, Jhakhri.