High Court of Himachal Pradesh today directed the Executive Officer of Municipal Council, Jawalamukhi to remain present in the Court 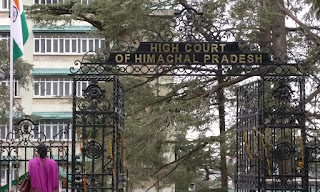 SHIMLA-----The High Court of Himachal Pradesh today directed the Executive Officer of Municipal Council, Jawalamukhi to remain present in the Court alongwith record to show cause as to how and in what manner the land was alloted to the petitioner or other similarly placed persons. The Court further directed him to explain about the mode of allotment adopted by the Municipal Council, for such allotment.

A Division Bench comprising Hon'ble the Chief Justice Surya Kant and Justice Ajay Mohan Goel passed these orders on a writ petition filed by one Shri Satinder Singh Gulari of Village Bohan, P.O. & Tehsil Jawalamukhi, District Kangra. The petitioner has alleged in the petition that he was allotted a vacant plot for a period of 25 years on lease basis, at the rate of Rs.150/- per month on the Kangra road in Jawalaji by Executive Officer, Municipal Committee, Jawalamukhi and he was asked to deposit Rs.5000/- as security and to execute and agreement in this behalf. The Petitioner has further submitted that due to his father's illness, he could not pay the rent during 2008-2010, qua which notice was issued to him and on receipt of the notice, he immediately deposited the amount with interest. He has further stated that however, in the year 2010, when he came to know that the plot allotted to him is within the controlled width of the Road as per the provisions of the H.P. Roadside Land Control Act, 1968, he submitted an application and it was decided in the house of Nagar Parishad to adjust him at some other vacant plot and was assured that very soon he would be given no objection for installing electricity connection as well as water connection, so that he can earn his livelihood. The petitioner has stated that despite making number of requests, he was neither rehabilitated to any other suitable place nor was allotted a shop, which are lying vacant in the complex constructed by the Municipal Council in Jawalaji near Gate-I, where as rent for the space as usual has been charged from him from 2005 till March, 2019. The petitioner has prayed that the Municipal Council may be directed to allot him shop , which is lying vacant and may be provided electricity and water connection, as has been done in the cases of other similarly situated persons. He also prayed that the respondents be directed to produce the entire record pertaining to the allotment of plots before the Hon'ble Court.