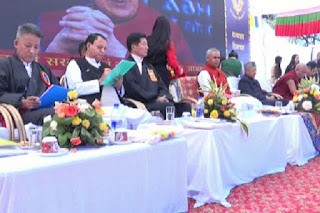 SHIMLA---Addressing the 'Thank You Himachal' public event on completion of 60 years of Tibetan community in exile in India organised by Central Tibetan Administration and Tibetans living in Himachal Pradesh at historical Ridge here today to express gratitude to the people and government of Himachal Pradesh, Governor Acharya Devvrat said that India has a culture of 'Athithi Devo Bhav'. By giving message of generosity, love and goodwill we have respected every culture of the world and this was the unique identity of Indian culture, he added.

He said that the India and Tibet had integral culture and business relationships for centuries. The people of the Tibetan community in exile were living with love, affection, unity and goodwill in this country and we had never considered the Tibetan community different from ours. He said that it was their greatness that they always express gratitude to the people of India.

"The third generation of Tibetan community is contributing to the progress of the country by adopting India's culture and language. This country belongs to you as much as to the people of India", said Acharya Devvrat.

The Governor said India had a liberal culture and we had adopted foreign invaders too. The Tibetan people, whose basic culture was associated with Buddhism and Buddhist monks gave the message of unity, love and goodwill all over the world and hence the culture was not diverse from Indian culture. Expressing happiness over the basic amenities being provided to the people of this community, he expressed hope that mutual understanding would continue in future also.

The Governor also inaugurated the exhibition put up by the Central Tibetan Administration on this occasion.

Horticulture and Irrigation & Public Health Minister Thakur Mahender Singh said that Himachal Pradesh was the land of Gods and we consider our guest equal to God. He said that the State Government considers the Tibetan community to be Himachali only. He called upon the Tibetan community to join the natural farming campaign being run under the guidance of the Governor.

Dr. Lobsang Sangay, Sikyong of Central Tibetan Administration said that the love, protection and acceptance that he had received in India in last 60 years reflect the greatness of Indian culture. The sentiments still persists for which the Tibetan community expresses gratitude. He called India his second home and said that the Tibetan community was also contributing in furthering high traditions and prosperous culture of India.

The video message of Tibetan religious leader Dalai Lama was broadcast on the occasion in which he expressed gratitude to the people of Himachal Pradesh.

The artists of the Tibetan community presented 'Maitri Song' in Hindi.