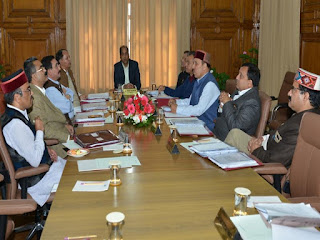 SHIMLA---     The State Cabinet in its meeting held here today under the Chairmanship of Chief Minister Jai Ram Thakur decided to cancel the memorandum of understanding (MoU) and implementation agreement signed on 5 June, 2006 with M/s Himalayan Ski Village Limited for setting up of Ski village in Kullu district.

The Cabinet also decided that the Industry department would refund three percent stamp duty out of the 6 percent stamp duty charged from the industrialists at the time of registration provided they purchase private land for setting up the post harvest processing infrastructure in the State after installation of the unit.

The cabinet gave nod to providing government land measuring 13-47-52 hectares in Shilapur, Tehsil Kalpa and Murang in Kinnaur district on lease in favour of HPPCL for construction of Kashang hydroelectric project stage-II and III in accordance with the provision of H.P. Lease Rules, 2013 on lease amount of Rs. 180 per year for 40 years, which would increase by 5 percent after five years by relaxing the provision of Section 118 H.P. Land Reforms Act, 1972.

It decided to transfer government land measuring 24-51-09 situation in Dharamshala Tehsil of Kangra district in favour of Ministry of Human Resource Development Govt. of India for setting up of the Central University.

A decision was made for making amendment in Himachal Pradesh Goods and Services Tax (Amendment) Ordinance, 2018.  Under this, the minimum taxable turn over limit has been enhanced to Rs. 20 lakh from exiting limit of Rs. 10 lakhs. This will give a big relief to small traders in the State. The filling of return by small tax payers (composition dealer) has been simplified and they will now file the return quarterly instead of monthly and the payment of tax will also be done quarterly.

It decided to include Karate instead of Karate-DO game for recruitment in government service under three percent reservation for outstanding sportspersons of the state.

It also gave nod to fill up 94 posts of class-IV employees in Technical Education department on daily wage basis.

The approval was given to fill up 9 posts of clerk through Limited Direct Recruitment (LDR) and creating and filling up of 50 posts of Junior Office Assistants (IT) in Irrigation and Public Health department.

It also gave its nod to create and fill up 6 posts of Emergency Medical Officers in Shri Lal Bhadur Shastri Medical College, Ner Chowk in district Mandi. This would ensure best emergency medical service to the patients in the region.

It approved to include Integrated Development of Logistics sector as new subject in Industries Department against the Sr. No.10 in the Business of the Government of Himachal Pradesh (Allocation) Rules, 1971.