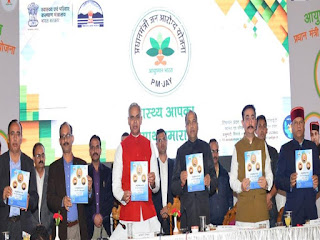 Scheme to cover over 22 lakh people of the State

SHIMLA-------------  On the occasion, the Governor thanked and congratulated the Prime Minister for launching such a big scheme related to the health sector and said that this shows his concern about the health of poor people. He urged the people not to depend on free medicines and other facilities and added that we should understand that by maintaining a healthy life through Yoga and taking healthy food, medication will not be needed. Thus, the money that spent on health to be used on other development works, he added. Have faith on the system of nature and conduct accordingly, said Acharya Devvrat.

Earlier, the Governor also interacted through video conferencing with the Deputy Commissioner Kinnaur who launched the scheme at district level and urged him to direct health officials in the district to gave information and mobilize the people particularly the people in remote areas about the scheme so that the people could be benefitted from the scheme in the real sense.

While addressing the gathering, Chief Minister Jai Ram Thakur said that Ayushman Bharat- Pradhan Mantri Jan Arogya Yojana would ensure that none in the State and the country were deprived of medical treatment due to want of money. He said that this was the biggest health Scheme of the world which would cover over 10 crore families of the country. He said that about 22 lakh people of the State would be benefitted under the Scheme. He said that the beneficiaries would get an insurance cover of Rs 5 lakh for treatment. He said that as many as 175 hospitals have been registered for treatment under this Scheme.

Chief Minister said that the State Government was also implementing Mukhiya Mantri State Health Care Scheme, under which over 1.05 lakh families have been covered. He said that in this way almost whole population of the State have been covered under one health insurance Scheme or the other. He said that the State Government was endeavouring to provide quality and specialised health care facilities to the people of the State. For this, the existing health institutions were being strengthened by equipping them with men and machinery, he added.

Direct relay of launch of the Scheme by Prime Minister Narendra Modi was also telecasted from Ranchi on the occasion.

Later the Governor and Chief Minister released guideline booklet of the Scheme.

The Governor and Chief Minister also presented Golden Beneficiary Cards to the beneficiaries of the Scheme on the occasion.

Speaker HP Vidhan Sabha Dr. Rajiv Bindal said that the Scheme was the biggest gift for the people of the country as well as the State from the Prime Minister Narendra Modi. He said that whole population of the State would be covered under the Scheme.

Additional Chief Secretary Health and Home B.K. Agrawal while welcoming the Governor, Chief Minister and other dignitaries said that it was an historic day as world's largest health Scheme was being launched today for millions of the people of the country. He assured the Chief Minister that the Health Department would ensure effective implementation of this Scheme in the State.

A short documentary produced by Media Advisor to the Chief Minister Rohit Sawal was also shown on the occasion.