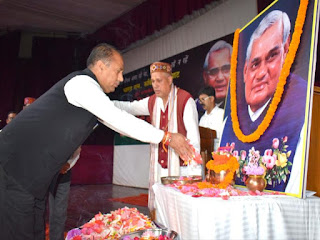 A  Sarv Dharam Prayer Meeting was also held on the occasion.

Later, the Ashes were immersed at Vishastha, Beas River near Manali by the Chief Minister.

Describing Atal Bihari Vajpayee a multi-faceted personality, Jai Ram Thakur said that apart from being the statesman, he was an excellent orator, a passionate poet and a committed journalist.  He said that although he was away from active life for the last twelve year but still because of his noble works lakhs of people participated in his funeral pyre, this shows his popularity among the common masses. He said that Vajpayee always showered special benevolence on the State of Himachal Pradesh and its people.

Chief Minister said that Atal Bihari Vajpayee always considered Himachal Pradesh his second home and has a house at Prini in Kullu district. He loved to visit the State whenever he got time from his busy schedule. He said that it was Atal Bihari Vajpayee who conceived the idea to construct Rohtang tunnel for connecting landlocked hinterland Lahaul valley with rest of the world way back in 1998. He said that Rohtang Tunnel was announced by him on June 3, 2000. He said that this project was nearing completion and would be the biggest gift of Shri Vajpayee to the State.

Chief Minister said that people would come from far flung areas just to listen to the speeches of Shri Atal Bihari Vajpayee. He said that his speeches used to be very fiery and phenomenal and  whenever Shri Vajpayee was addressing the public meetings, even his adversary would eagerly listen to his speech.

He urged the people to share memories and memoirs with Atal Bihari Vajpayee so that the same can be used in a befitting manner to make these memories evergreen. He also planted a sapling of Deodar in memory of Shri Vajpayee in the complex of the Institute and also tied Rakhi to the sapling.

Forest and Transport Minister Govind Singh Thakur while paying tributes to Shri Vajpayee said that Shri Vajpayee had special love for the people of Himachal Pradesh in general and Kullu-Manali in particular.

MP Ram Swaroop Sharma described Shri Vajpayee as a world leader with a poet from the heart. He said that it was the sheer grit of Shri Vajpayee to go ahead with Pokhran Nuclear Test making India a nuclear power.