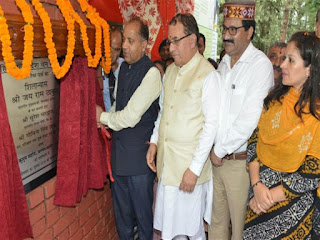 SHIMLA---      The State Government would develop 22 new Nature Parks in the State to give thrust on development of eco-tourism in the State. This was stated by the Chief Minister Jai Ram Thakur while launching the "Mera Vriksh Mera Parivar", an afforestation programme of the Forest Department by planting a sapling at Annandale Road, Shimla. The Chief Minister also laid foundation stone of Glen Nature Park near Kumar House here today.

Chief Minister said that the Glen Natural Park spread over an area of 164 hectare would be developed by spending an amount of Rs 98 lakh having three walking trails which include IIAS to Brass Path Gate, Glen Park to Summer Hill and Glen Park to Forest Nursery Glen. He said that three rain shelters and three watch towers would also be constructed in the park. In addition three picnic spots would also be developed in this park, he added.

Jai Ram Thakur said that trees are our best friends as they provide us fuel, fodder, fruits and above all they conserve our environment for the future generations. He said that it should be our duty that we all plant trees and ensure their survival. He said that more and more thrust must be laid on afforestation process in and around Shimla town so that its pristine glory could be preserved.

He said that the Glen Natural Park on completion would be an added attraction for the local people as well as the tourists. School children would find this place as a beautiful destination for picnic, he added. He said that climate change was the biggest challenge for each one of us and the root cause of this was the reduction in the forest cover and thus it becomes vital that each one of us ensure active participation in environment conservation.

Chief Minister said that over one lakh plants could be planted in Shimla town on government as well as forests land. He said that 17.54 lakh trees were planted during three days during the afforestation campaign launched by the State Government which was a record in itself.

Education Minister Suresh Bhardwaj said that students should come forward for tree plantation as green world is a clean world. He said that pines, burass and baan forests have a special place in the identity of Shimla town. He said that this Nature Park would also have a few beautiful bridges as a special attraction for the tourists.

Forest and Transport Minister Govind Singh Thakur said that the Chief Minister was always endeavouring to take new initiatives. He said that only 27 percent area of the State was actually covered by forests. He said that a special campaign would be launched in Shimla town for tree plantation.

Mayor Kusum Sadret welcomed the Chief Minister and other present on the occasion.