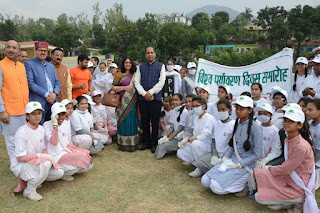 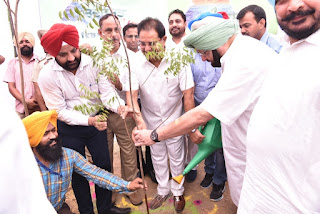 10 solid waste management plants will be set up in State

SHIMLA--------World Environment Day was an awakening call for individuals to take charge of protecting the environment and to realize the severity of plastic usage in daily life. This was stated by the Chief Minister  Jai Ram Thakur while presiding over the State level function to launch Pollution Abating Plants Abhiyan (PAPA) on the occasion of World Environment Day-2018 celebrated at Government Polytechnic College Sundernagar in Mandi district today.

Earlier, the Chief Minister laid foundation stone of Guest House and of Mechanical Engineering Block Building  in Government Polytechnic Sundernagar to be constructed at a cost of  Rs. 1.50 crore and Rs 5.58 crore respectively.

Shri Jai Ram Thakur gave a clarion call to the people of the State to work collectively for making various policies and programmes initiated by the State Government a success, He said that polythene was rampantly polluting our water bodies, harming marine life and posing a threat to human health, has been one of the major concerns of environmental bodies this year.  He said that the H.P. became first state in the country to ban use of polythene bags in the State. He said that the tourists visiting the State must be sensitized to use jute or paper bags instead of polythene bags.

He said that the water crisis in Shimla town was due to the pollution and degradation of water catchment areas, rivers and water bodies supplying water to the town. He said that pollution reducing plants would be developed in State nurseries and provided to the people for plantation. He said that the State Government has asked the Industries Department to prepare a project for setting up unit for pine needles. He said that one steel bottle would be provided to each Government School students in a phased manner to discourage use of plastic bottles under the Mukhiya Mantri Vardi Yojana. He also urged the parents to buy steel bottles for their children instead of plastic bottles to help in environment conservation.

He said that special thrust would be laid on plantation of trees form 5th June to 1st July, 2018 in Baddi, Nalagarh, Parwanoo, Kala Amb, Poanta Sahib, Sundernagar, Damtal and Una as these were the most polluted cities of the State.

Chief Minister also gave prizes to the best eco-clubs of the educational institutions on the occasion for working towards environment conservation.

Member of Parliament Shri Ram Swaroop Sharma said that the World Environment Day was an occasion to take a pledge to work collectively for making our environment pollution free. He said that the Jan Manch programme launched by the State Government was providing an apt platform for the common man to redress their grievances. He said that airport was also coming up in the district which would give a major thrust to the tourism development in the region.

MLA Sundernagar Shri Rakesh Jamwal while welcoming the Chief Minister in his home constituency said that environmental conservation initiatives were the need of the hour. He said that the area would witness new milestones in the field of development in the times to come. He thanked the Chief Minister for laying foundation stones of Guest House and of Mechanical Engineering Block Building  in Government Polytechnic Sundernagar to be constructed at a cost of  Rs. 1.50 crore and Rs 5.58 crore respectively.

Member Secretary State Pollution Control Board Dr R.K. Pruthi while welcoming the Chief Minister and other dignitaries detailed various activities being undertaken on the World Environment Day. He said that the Pollution Abating Plants Abhiyan (PAPA) was being launched today by the Chief Minister for environmental conservation in the State. He also gave a brief presentation of PAPA on the occasion.