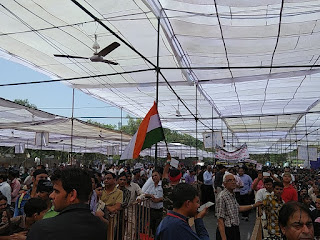 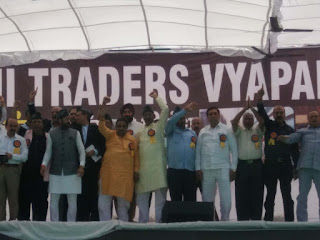 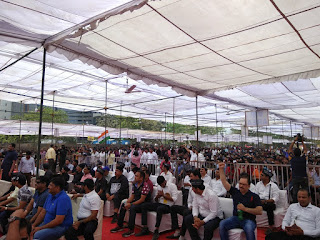 New Delhi------Protesting against sealing in an impressive way more than 7 lakh business establishments and more than 3000 commercial markets in Delhi observe a Delhi Trade Bandh call given by the Confederation of All India Traders (CAIT) and no commercial activity took place. Markets wore a deserted look. The protesting traders also held a Mega Rally at Ramlila Ground which was attended not only by the traders but their families, children and employees. Expressing anguish against sealing, the traders did not send their children to School & Colleges today.

According to an estimate in last three menthes Trade in Delhi has declined by about 40% due to sealing. Today's Trade Bandh caused a business loss of about Rs.1800 crore resulting into a revenue loss of about 250 crore to Government. If situation remains continue, the Delhi trade will be highly distorted soon which will adversely affect the economy of Delhi.

About 50 thousand people attended the Rally at Ramlila Ground chanting slogans against sealing and expressing displeasure about the arbitrary working of the Monitoring Committee. The Traders alleged that the Monitoring Committee is working like an extra Administrative Authority and concerned about sealing the shops irrespective of the fact whether it is legal or illegal. The de-sealing of the shops is a cumbersome process and Government in Delhi has become deaf & dumb.

Addressing the Rally at Ramlila Ground CAIT Secretary General & Chairman of the Rally Mr. Praveen Khandelwal raised the fundamental issue of not following the due process of law by the Monitoring Committee and MCD. The fundamental provisions of MCD ACT,1957 are being flouted. There is no appeal, no daleel and no Vakil. No service of any show cause notice. Even the Right to Appeal to Appellate Tribunal & Delhi LG has been snatched. The fundamental rights are being openly destroyed.

Mr. Khandelwal further said that since 1962 so far three Master Plans have been enforced but due to irresponsible, lethargic and lukewarm attitude of the officials none of the Master Plan was implemented in its right perspective resulting into current mess. He said that Secretary Ministry of Urban Development in an Affidavit filed in Supreme Court in 2008 admitted that Government could develop only 16% of commercial space in Delhi, then why the Traders are being blamed .It is a failure of the Government.

Mr. Khandelwal demanded the Government that to improve the situation of Delhi immediate stoppage of sealing for at least one year is the need of the hour and a high level committee should be constituted under the Chairmanship of Delhi Lt. Governor consisting of senior officials of Central & State Government and representatives of trade to analyse the shortcomings and failure of all three Master Plans and to recommend the Government ways and measures to make next Master Plan a well thought document to make Delhi a better city.

In a unanimous resolution passed in the Rally, the Traders demanded the Government to that due process of law should be mandatorily followed before taking any action of sealing. The Central Government should bring a Moratorium Bill on sealing in current session of Parliament whereas on the other hand Delhi Chief Minister should pass a Bill for stopping sealing in current session of Assembly and forward the same to Centre for approval. The shops which have been sealed should be de-sealed and the process of de-sealing should be made fast and easy. The Central Government should bring an Amnesty Scheme notifying 31st December,2017 as the cut of date and status quo should be maintained. The Delhi Government should immediately notify 351 Roads.