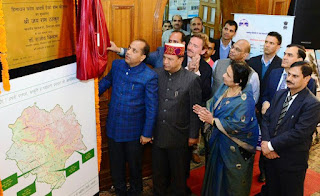 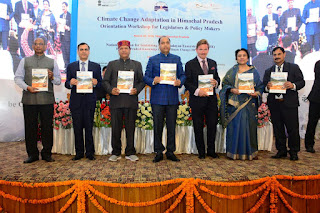 Speaking on the occasion, Chief Minister Shri Jai Ram Thakur said that Himachal Pradesh being a part of Himalayan mountain ecosystem has wide range of natural water resources, but the climate change and receding Himalayan glaciers was an area of concern for this State also. He said that loss of vegetation and decrease in ground water recharge even during the months of monsoons was the result of climate change. He said that as per the Intergovernmental Panel on Climate Change report the temperature of earth has increased by 2 degree during the last 20 years which has resulted in decrease in glaciers. The Gangotri glacier falling in Himalayan area has receded at the rate of 30 meters per year, he said.

Shri Jai Ram Thakur said that Himachal Pradesh as a custodian of environmental conservation has set new milestones in this field and other state of the country should follow the same. He said that the State Government had prepared an Environment Master Plan for the State. Himachal Pradesh is the only State in the country which after research on climate change was implementing adaptation plan up to village and panchayat level.

He launched the Model Eco-Village scheme on the occasion. The main objective of this scheme is to demonstrate villages as models of sustainable development based on environmentally responsible individuals and collective action for reducing human ecological foot-print through judicious use of natural resources. In first phase five villages of the State has been selected. These villages are Tapra in Bilaspur district, Dethal in Sirmaur district, Janjehli in Mandi district, Kamru in Kinnaur district and Charu in Shimla district.

He urged the elected representatives to disseminate the information and knowledge acquired during the workshop in the respective areas so as to sensitize the masses regarding adverse effects of climate change and environment degradation.

Speaker, Vidhan Sabha Dr. Rajiv Bindal said that climate change and environment conservation were burning issues worldwide and needs to be redressed at the earliest so that the situation does not go beyond our control. He said that workshops of such magnitude would go a long way in sensitizing the masses regarding this core issue of climate change. He said that our ancient Indian culture also teaches us to respect Mother Nature and ensure causing minimum harm to it.

Ambassador of Switzerland in India Dr. Andreas Baum said that Switzerland and the Himachal Pradesh have identical geographical and topographical conditions. He said that both Switzerland and Himachal are major tourist attraction and have good number of glaciers. We both can work with greater coordination and cooperation of meeting out the challenges of climate change on environment, he added. He also lauded the efforts of the State Government in the field of environmental conservation.

Dr Ashish Chaturvedi, Director Climate Change, GIZ (India) while giving presentation on 'Climate Change Adaptation in Rural Area-Indian Programme (CCA-RAI) in Himachal Pradesh' said that we need to make efforts to enhance capacities to conceptualize and implement projects on climate change. He said that the main stress was on capacity building programme in the State and efforts were being made to strengthen capacity building up to the panchayat level.

Prof. A.K, Gosain of Indian Institute of Technology while giving presentation on 'Policy and Planning for Water Resource Management for Climate Change Adaption in HP' said that the study on Himachal Pradesh  on rainfall shows that the annual rain fall and annual number of rainy days had reduced drastically. He said that this has resulted in negative impact on water bodies of the State.  He said that we most analyze each river basin of the State for availability of water resources for implication of climate change on environment, so that new adaptation strategies could be chalked out.

Dr Anil Kulkarni from Indian Institute of Science, Bengaluru gave a detailed presentation on Himalayan glaciers and climate change.  He said that most of the glaciers of the Himalayas are reducing and retreating which need to be redressed unless the situation could become alarming. He said that if steps were not taken for environmental conservation, glaciers may disappear by 2050. He said that melting of glaciers could result into formation of lake which could prove disastrous. We can save the Himalayan glaciers if all the major countries of the world follow India's example by at least implementing their respective agreement goals, he added.

Shri Ajay Mathur, Director General, TERI while giving presentation on the occasion said that it was vital to promote carbon sequestration scheme for conservation of forest and water resources. He said that these initiatives have to be taken at the highest level. He said that electric buses, power from waste, construction of solar passive houses and effective waste treatment plants could be beneficial for protecting environment of our cities. He said that since Himachal Pradesh is a fruit state, expert advice should be taken for increasing farm income and  lessen bad impact on environment by minimizing use of chemical fertilizers. He also suggested for initiating Carbon Credit Scheme of the State to increase green cover and environment conservation.

Additional Chief Secretary Environment Science and Technology Smt. Manisha Nanda while welcoming the participants said that climate is a reality and we all have to work with close coordination to cope with its effects on environment.  She said that if we do not take effective steps to work for environmental conservation, the very existence of humanity would be under threat. She said that it was vital to chalk out strategy for climate change and ensure effective information education and communication conservation for spreading awareness regarding climate change and environment.