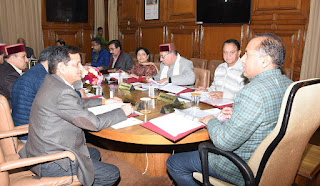 SHIMLA-----The Cabinet in its meeting held here today  scrapped the Scheme for refund of tax to the two Gold Refineries in the State and ordered that the apparent criminal conspiracy to defraud the State of legitimate tax dues would be investigated by the vigilance and the guilty will be identified and punished as per the law of the land.

The two firms are required to deposit the total amount of arrears to the tune of Rs. 14,10,98,423 as tax of Gold Refinery Units under H.P. Tax on entry of Goods into Local Area Act, 2010.

It also decided that the incentive scheme for revival of sick industrial units in the State would also similarly be investigated.

It also decided to  order an inquiry  into the approvals accorded for the construction of Circuit House building at Chambaghat  and Hospital building at Kandaghat in Solan district the work on which was reportedly started without the prior approval of council of Ministers by the previous   Congress Government thereby flouting the rules of business and instructions of the Government.

The Cabinet gave its approval to fill up 200 posts of ayurvedic medical officers in Ayurveda department on contract basis. 100 posts will be filled batchwise and 100 through direct recruitment to cope with the shortage of ayurvedic doctors. This decision will go a long way in providing ayurveda health care facilities to the people of the State at their door steps.

The Cabinet accorded its approval to rename Government Ayurvedic Health Centre  Salah -Jandrah  in district Kangra after the name of martyr Jagdish Singh Rana as a tribute to him.

The Cabinet gave its approval to fill up five posts of Lab technicians one post of Superintendent, Grade-II, one post of Senior Assistant and one post of Junior Office Assistant (IT) in Rajiv Gandhi Government Ayurvedic Hospital, Paprola.

It decided to fill up two posts of horticulture incharge and one post of assistant botanist in Ayurveda department.

The Cabinet gave its approval to Excise Policy 2018-19. The policy aims to balance the aspirations of citizens, consumers, manufactures, suppliers, bottlers, wholesalers, retailers and the Government. A major emphasis has been given to streamline the supply of liquor from manufacturers to the wholesalers and to the retailers.

In terms of Ease of Doing Business, the conditions for securing source license have been liberalized and numbers of excise levies have been reduced.

As far as the retailers are concerned the conditions regarding the unlifted Minimum Guaranteed Quota have been relaxed, thus giving a big relief to them. Also Security amount fixed for the retailers at the time of allotment has been reduced from 18 % to 13 percent. This shall ensure availability of sufficient working capital to invest in the business with the retailers.

The Cabinet has approved allotment of retail vends by a transparent draw of lots system this year with aim to achieve sustained growth. The Cabinet has further approved policy for establishment of microbrewery for beer manufacturing in hotels, restaurants independently which will boost tourism in the State.

This has been ensured by reducing import fee on ENA (a major raw material) and Beer and by introducing the Maximum Retail Price (MRP) system on the sale of liquor (CL-Country Liquor and IMFL- Indian Made Foreign Liquor). This will bring fair and healthy competition amongst the licensees. The rates will also be displayed in all the retail vends. Keeping in view, the welfare of the people in the State, INR 1/- will be collected and INR 2/- will be collected on the sale of every bottle of CL/IMFL which shall be allocated towards the Ambulance Services Fund and Welfare of Local Bodies respectively.

A major relief has been given to the wine producers in the Himachal Pradesh by allowing them to sell their products directly  to the retailers and bars. To further boost the wine industry and the horticulture sector, various excise levies have been reduced substantially and transportation conditions have been relaxed, along with increasing the Import Duty on wines produced out of the State.