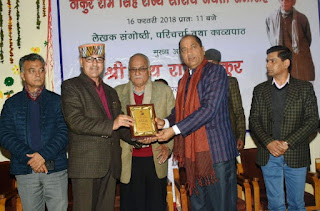 Shimla-----Chief Minister Jai Ram Thakur, who was at Neri in Hamirpur district today attended the State level symposium and seminar  organised on  birth anniversary of legendary historian Thakur Ram Singh said that he was a motivator and an intellectual who contributed in conservation, compilation,  re-establishing  and rewriting historical facts of the country. The seminar was organised by department of language Art and Culture in Jagdev Chand Research Institute.

A litterateur from Rashtriya Swayam Sevak Sangh,Thakur Ram Singh  played a pivotal role while heading Bhartiya Itihaas Sankalan Yojna and his research was focused on knowing the artefacts and real history of the country, said the Chief Minister. He said that there were  few people who write history, others create history, and few become history in themselves and Thakur Ram Singh  was such a legend.

He said that Thakur Ram Singh inspired many historians, scholars and senior workers to achieve the objectives of  reflecting the real history of country. Thakur Ram Singh expanded the work in different parts of the country and was successful in associating many scholars, historians and intellectual with the Ideology, he said. The role of Thakur Ram Singh in initiating research and making correction in Indian history  will be remembered for ever, he said.

"I have learnt that Thakur Ram Singh  conducted four national seminars in Himachal Pradesh on human creation in Vaivastar Manvantar, social system, invasion of Sikandra (the Alexander) and his death in Jammu region, which speaks in volumes of his revolutionary research and writings as well", said the Chief Minister.

It was  due to the inspiration of Thakur Ram Singh and the efforts of Akhil Bharatiya Itihas Sankalan Yojana that Thakur Jagdev Chand Memorial Research Institute was set up  at Neri and he was its founder patron. Many important projects have already been started at this Institute.

Earlier, he offered floral tributes to Thakur Ram Singh and also referred to Lal Chand Prarthi, Dr. YS. Parmar, Pahari Gandhi Baba Kanshi Ram and others. The Chief Minister said that the celebration of anniversary of Thakur Ram Singh would be made an annual affair and also suggested to bring out a book on him to be made available in school libraries.  He assured to provide ala possible assistance for strengthening the Institute.

Purnima Chauhan, Secretary, Language, Art and culture, also spoke on the occasion and assured the Chief Minister that this will be a yearly affair onwards.