NITI AAYOG TO SUPPORT TRADERS FOR ADOPTION OF TECHNOLOGY 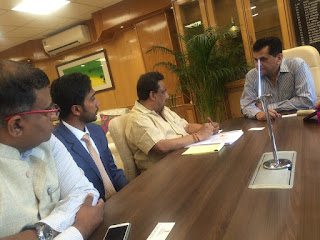 NITI AAYOG TO SUPPORT TRADERS FOR ADOPTION OF TECHNOLOGY
​​​​​​Vijyender Sharma
Shimla-----Niti Aayog will extend its all out support to small businesses in the Country to embrace technology for ensuring growth in their businesses-said Mr. Amitabh Kant, CEO, NITI Aayog to a delegation of the Confederation of All India Traders (CAIT) which met him today at his office at New Delhi. The delegation was led by CAIT's Secretary General Mr. Praveen Khandelwal. While talking to the delegation Mr.Kant agreed with the demand of a National Trade Policy for Retail Trade and said that he will speak to Ministry of Small & Medium Enterprises (MSME) in this regard.
​Mr. Kant said that small businesses are life line of economy and as such needs a special focus on policy front whereas the traders and other small businesses should also understand that change is inevitable and as such they also need to up-grade and modernise their existing business format and adopt technology to accelerate growth in their trade which will culminate into growth of economy as well. " If technology is embraced who can beat Indian traders"-said Mr. Kant. He also advocated a simplified and rationalised tax structure in the Country and said that GST will certainly relieve the traders from various taxes and their paper formalities and will convert into ease of doing business in India.
The CAIT delegation sought government's support to incentivize cashless payments for broader acceptance. It is critical to note here that CAIT announced its commitment last year in May to help the self-organized sector move towards advanced means of payments and adoption of technology to ease way of handling cash inflow for all traders & merchants. This initiative is aimed at empowering small and medium businesses with knowledge, tools and access to equip themselves with better forms of transacting currency with end customers in line with Prime Minister Shri Narendra Modi's program 'Digital India'. This partnership, with global technology leader in electronic payments MasterCard, has achieved significant success across key states and has outlined an ambitious agenda for 2016.
​While apprising Mr. Kant about various policy issues of the trading community, Mr. Praveen Khandelwal, Secretary General of the CAIT said that due recognition to magnificent contribution of small businesses in national exchequer is need of the hour and a mechanism needs to be created which can have regular dialogue with traders on various issues. The traders are willing to adopt technology but there has to be a support policy from the Government. ​"We are surely moving towards a technology dependent world wherein internet and mobile would be as essential as water and air​"-said Khandelwal.​ ​He also urged that ​clear guidelines and ownership is defined with respect to ​e-commerce business in India.​. This is also applicable to other forms of retail trade including direct selling especially given the confusion pertaining to long pending guidelines for the sector. We have requested ​NITI Aayog'​s support in this regard​.