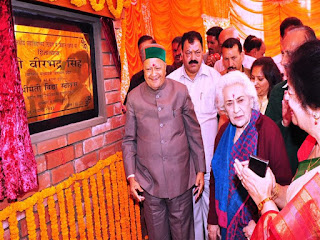 Shimla---Chief Minister Shri Virbhadra Singh today said that the State Government was emphasising on girl education as that society prospers most where women were well educated. Education was key to success and we need to improve the quality of education. Both the teachers and the parents need to ponder upon as how to bring more improvement in quality of education.  The Chief Minister was addressing a public meeting at Nehru ground, Theog in Shimla district.

He said that today there were as many as 94 colleges in the State besides 15534 schools. The Government had opened more colleges in the remote and the interiors of the state with a view to benefit girls.

He said it was a matter of great contentment that today Himachal Pradesh was second in the country in terms of literacy percentage after Kerela and time is not far when our State would be the most literate in the country.

The present State Government had been endeavouring to ensure a transparent, responsive and efficient administration to the people and to deliver benefits of the policies and programmes of the Government in a befitting manner, he said.

There were few in opposition, who were bent upon dividing the State on the basis of caste, region and religion. For Congress, the country and the state was one and we need to stand united and understand well that no one could stop Himachal from being the pioneer hill state in terms of development. He also stressed upon preserving the customs, culture and traditions adding that it was our past, present and future as well.

Shri Virbhadra Singh said it was farsightedness of the first Prime Minister of India Pt. Jawahar Lal Nehru that Himachal was formed as a separate entity and achieved statehood and thereafter since the times of Dr Y.S.Parmar, the state had treaded fast on the development track and today was the most developed state amongst other hill states of the country.

He said that the Theog region was known for cultivation of potatoes and now the people were earning handsome income from producing both seasonal and off season vegetables. Horticulture plays an important role in the socio-economic development of the state adding that Rs 1000 crore had been approved for the Himachal Pradesh Horticulture Development Project of the state. Subsidy on anti-hail nets has been increased from 50 per cent to 80 per cent, he said.

The Chief Minister said that the boys school in Theog would be re-constructed.

He directed the Animal Husbandry department to immediately shift their office from the proposed bus stand site at Theog, for which a provision of rupees three crore had been made.

• He  announced IPH Division at Matiana.

• Announced rupees ten thousand each for schools who presented cultural programmes from his discretionary grant.

Earlier, the Chief Minister dedicated Kufri-Cheyyad road on which a sum of Rs 97 lakh was being incurred. He also laid foundation stones of science block of Government Degree College Theog with the cost of Rs 6.83 crore and combined office complex to be constructed with an outlay of Rs 24 crore which will house offices of SDM, Tehsildar, election office, treasury office and other offices as well. He also laid foundation stone of science lab of Government Girls Senior Secondary School, Theog to cost Rs 1.80 crore.

The Chief Minister also inspected the Theog by-pass road, the under construction four floor SC/ST hostel of Government Degree College at Theog being constructed by HIMUDA and  to be completed with an outlay of Rs 2.71 crore. It will have a capacity to house 105 students and will have 27 dormitories besides other facilities as well.

He also inspected the site of Theog bus stand.

Speaking on the occasion, Irrigation and Public Health Minister, Smt. Vidya Stokes said that Congress Party believed in work culture and welfare of all the sections of the society rather than airing false propaganda of development as done by the Opposition. She said that hand-pumps amounting to Rs 35 crore would be installed to meet the drinking water demands of the people soon. Besides, a sum of Rs. 2292 crore was being spent on various drinking water and irrigation schemes in the State.

She said that the Congress leaders were united under the leadership of Chief Minister and due to love of the people of the State and the unprecedented development witnessed during the Congress regime during the last three years, Shri Virbhadra Singh would again be elected as Chief Minister for the seventh time as age was not a constraint for serving the people and the society, she said.

HP State Congress President, Shri Sukhvinder Singh Sukhu said that the political trend in the country was fast changing and deteriorating. Today, there was need to understand the tactics of the NDA led BJP at the centre,  which was boasting of Congress free India, forgetting, that it was the Congress was synonym of development. He said that congress organisation and party in the state was united and will ever remain so.

Shri Sukhu said that Smt. Stokes was a source of inspiration for him and added that Shri Virbhadra Singh had ensured the development of all areas alike without any discrimination. He said that the State Congress was on mission to expose the Modi Government. He said that Congress had given six Prime Ministers to India and it was since that period the actual development started.

He said that today Prime Minister Shri Narinder Modi was talking of Digital India, forgetting that it was in the regime of Rajeev Gandhi when the dream of Digital India came true.

The politics had stooped so low that the NDA government was questioning the Congress leaders and Gandhi family for proving their Nationality. It was ridiculous that the BJP was raising fingers at the Gandhi family, who sacrificed their lives for the Country. Referring to Smt. Indira Gandhi and Shri Rajiv Gandhi, he said that it was shame on part of few opposition leaders who were pointing towards the loyalty and Nationality of Gandhi family.

Transport and Technical Education Minister, Shri G.S. Bali, who also addressed the gathering, said that both Smt. Vidya Stokes and Chief Minister were source of inspiration for the young politicians.

He said that all the tall claims of Shri Narinder Modi pertaining to Minimum Government, Maximum Governance, depositing a sum of Rs 15 lakh in  account of each citizen of India, and attempts  to oust the Government's in Congress ruled states was enough to prove his falling graph. He exhorted the State Congress leaders to stay united and be aware of the political tactics of the NDA Government.

He said that a sum of Rs 250 crore had been spent on IIIT, the classes of which were being running in Una. ITI's had been opened in every assembly constituency adding that as of today a fleet of  2900 buses was there in the state. He said a sum of Rs 3 crore had been already provided for construction of bus stand at Theog adding that as soon as the building of Animal Husbandry department was vacated, the work on Bus stand at Theog would be started. He also said that the tenders of shopping complex had been moved. The survey of Polytechnic Institute at Dalash would soon be started, he said.  He also assured of starting classes of engineering college at Jeori before next general elections.