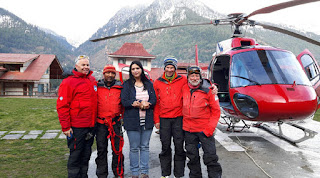 SHIMLA----Two of the remaining trekkers who went missing along with eight others in the state's Manali area were airlifted on Monday  morning from the Chanderkhani Pass in Kullu District of Himachal Pardesh, ending the 78 hours rescue operation.

The condition of all the rescued trekkers, mostly from Punjab, is stable and they are undergoing treatment in the government hospital in Manali. Six were airlifted on Sunday evening.

Seven students of the Sant Longowal Institute of Engineering and Technology in Punjab's Sangrur city along with their trekking instructor lost their way due to inclement weather while trekking to the Chanderkhani peak in Kullu district.

"This morning the remaining two were airlifted from the Chanderkhani peak despite bad weather," area Subdivisional Magistrate Jyoti Rana told  over phone.

Rana said the rescued students were given first aid, after which they were taken to Kullu. "They are all fine," she added.

The two rescued students are Hitender Sharma and Anil Kumar, who were spotted on Sunday near a cave-like structure where all eight had earlier taken shelter. Both were safe, she said.

Three teams of the Indo-Tibetan Border Police were pressed for search and rescue on March 11 after teams from a local mountaineering institute, the police and villagers failed to find them due to inclement weather.

A helicopter was pressed into service on Saturday, but it too failed to make much headway due to the bad weather.