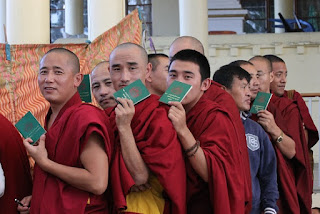 DHARMSHALA---Tibetan exiles across the world on Sunday voted to elect their nominees for the post of 'Sikyong' or prime minister and the members of the parliament-in-exile.

Long queues of men and women flashing their green colour voter identity cards were witnessed in the morning at nine polling centres in this town to elect one of the two prime ministerial contenders: incumbent Lobsang Sangay and Penpa Tsering, the Tibetan parliament speaker.

Tibetan spiritual leader the Dalai Lama is not a voter.

More than 90,000 Tibetans in exile across the world are to take part in the election.

In India, voting is taking place at Darjeeling, Bylakuppe, Dehradun and Delhi.

In the US and Europe, the electoral process is underway.

Some of the other countries where the elections are taking place included Japan, Russia and Australia.
A total of 47,105 Tibetans voted in the preliminary round in October last year.

Voters will also elect 45 members of the parliament in exile. A total of 94 candidates are in the fray. The results will be declared on April 27.

The 2016 general elections are the second direct elections for electing the Tibetan leadership since complete devolution of political authority by the Dalai Lama in 2011.
The five-year term of incumbent Prime Minister Sangay will expire in August.