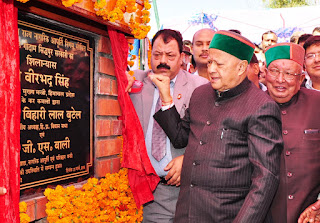 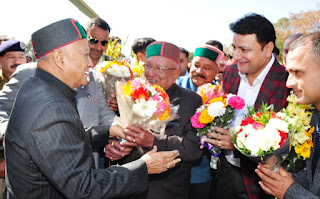 Adorned in colourful attires and radiant turbans, the people thronged in numbers to participate in the Shobha Yatra.

Shri Virbhadra Singh also declared open the traditional 'Chinj' (Wrestling) by hoisting the 'Lakhdata Peer' flag and performed pooja on the occasion. He also blessed the occasion by terming the Chinj as the ancient leisure wrestling bouts which were quite famous amongst the people of the State. He congratulated the people of the area on the occasion of festival of colours. He termed Holi as a festival of fraternity and love and exhorted the people to celebrate Holi in its true spirit. He announced indoor stadium to be opened in Palampur and said that the government was endeavoured to open more such stadiums in the state so that the energy of the youth could be channelised in a better way.

Speaker, Himachal Pradesh Vidhan Sabha, Shri Brij Bihari Lal Butail, also spoke on the occasion and welcomed the Chief Minister and honoured him. He also detailed about the history of the Chinj & Palampur Holi festival and listed the development of the area.

Chairman, Holi Mela Committee, Palampur, Shri Ajit Bhardwaj welcomed and honoured the Chief Minister and other dignitaries on the occasion.

Earlier, the Chief Minister laid foundation stone of Godown of Food Corporation of India (FCI), to have a capacity of 1100 MT at Rani Sidhpur to cost Rs.1.50 crore. Once completed, it will enhance the warehousing facility and cater to the requirements of various public distribution shops in Palampur and its vicinity. He also laid foundation stone of Five-storeyed parking complex to be constructed with an outlay of Rs.4.5 crore which will ease the traffic congestion in the town. He also laid foundation stone of Municipal Council office building, Palampur to cost Rs. 48 lakhs and foundation stone of 33 KV un-manned Electric sub-station at Holta to cost Rs. 3.60 crore to be constructed under Deen Dayal Upadhaya Gramin Yojna. The station when completed will solve the low voltage problem besides minimising distribution and transmission losses and benefit as many as 32 thousand people of 19 panchayats of the area.