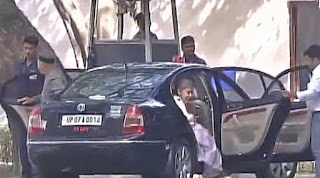 Shimla ---- Troubles for Himachal Pradesh CM Virbhadra Singh keep mounting with the Enforcement Directorate finding what it calls irrefutable evidence of the veteran Congressman resorting to forgery to build his defence in the disproportionate assets case he is facing.

Sources in the ED, which is probing money laundering charges against the CM and his associates, told   that they have gathered a strong body of evidence to establish that Singh allegedly forged registers, obtained ante-dated stamp papers and concocted back-dated agreements with apple dealers to seek to explain a big jump in his income — from Rs 47.35 lakh before an income tax raid (on his associates in December 2011) to Rs 6.57 crore after the tax department began proceedings against him.

ED sources said Singh, who is already being prosecuted by the CBI for acquiring assets disproportionate to his legal sources of income, could face arrest for fudging documents, besides charges of money laundering, a development that could create another political crisis for Congress.

Significantly, the beleaguered CM on Monday met party chief Sonia Gandhi to offer his explanation to the charges which are considered by some of his colleagues to be "pretty serious".

Soon after an I-T raid on him, Singh revised the returns he had filed for assessment years 2008-09 to 2011-12. He raised his family income for these years from Rs 47.35 lakh to Rs 6.57 crore after a case of disproportionate assets was made out against him.

According to a source, to substantiate his raised income, Singh allegedly obtained ante-dated stamp papers through his associates, forged registers and created false entries while allegedly concocting an agreement dated June 17, 2008 with an apple dealer who promised to pay him an enhanced amount for apples from his orchard. The ED trailed the stamp paper to the government-owned Nashik printing press, where it found that the press had actually dispatched the stamp paper only on September 24, 2008, three months after it was purportedly used by Singh.

Singh had entered into another agreement with an apple supplier on June 15, 2008. The probe revealed that the stamp paper used for this purpose was issued to another person in Shimla who had on June 11 used it at Uco Bank's Shimla branch, two days before Singh also showed its use on his agreement papers.

Meanwhile, Singh has accused BJP of using the ED and other agencies to destabilise his government.

BJP national secretary Shrikant Sharma rejected Singh's allegations and said, "So far he has been making efforts to avoid going to jail. He can go there any time."

The ED is probing Singh and family members under the Prevention of Money Laundering Act and had last week attached his properties worth at least Rs 8 crore, including a flat in Delhi's GK-1, bank deposits and some LIC policies. The PMLA case is based on a CBI FIR registered against Singh, his wife Pratibha and his LIC agent.

The Himachal CM had earlier approached the Delhi HC but failed to get exemption from personal appearance before the ED for questioning. He may be called for interrogation any day, sources said. Already, representatives on behalf of his wife have appeared for sessions with ED officials at its headquarters in Delhi.

Singh was not available for comment. Himachal Congress's chief spokesperson Naresh Chauhan too refused to comment, saying the party was not aware about the personal matters of Singh. "How will we know with whom he signed the agreements in his personal capacity?" he added.