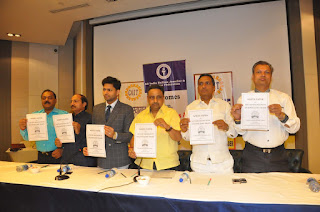 CAIT RELEASED WHITE PAPER ON EXCISE ON JEWELLERY
LEVY OF EXCISE IS STRETCH OF POWERS TO UNREASONABLE EXTENT                                        ​
Vijyender Sharma
SHIMLA----In the wake of indefinite strike by jewellery trade in the Country since March 2 against imposition of 1% excise duty, the Confederation of All India Traders (CAIT) released a White Paper at a Press Conference held at New Delhi alleging that the basic fundamental of levying excise on jewellery trade is untenable since the Finance Minister in his budget speech has announced imposition of excise on manufacturing of gold & diamond whereas jewellery traders are merely the sellers and not the manufacturers. In Central Excise Act, there is no term like "principle manufacturer" is defined and as such crafting a new term of principle manufacturer to bring traders into the ambit of excise is much against the provisions of Central Excise Act and thus its a case of stretching powers to an unreasonable extent-said CAIT.
In view of the logjam continued since last 26 days, the CAIT has appealed both Prime Minister Shri Narendra Modi and Finance Minister Shri Arun Jaitley for their immediate intervention in the matter and subsequent steps to resolve the issue. Prime Minister Shri Narendra Modi has always talked about empowering small businesses in the Country for ensuring robust growth of economy and participation of small businesses in policy making, the issue of excise on jewellery is an opportunity when a national debate is required on role of trading community in development of nation & economy. " We are of the confirmed opinion that absence of any policy for retail trade and that of a separate Ministry at the Centre gives leverage to bureaucratic machinery to keep the trading community at toes. It is the right time when a National Trade Policy for Retail Trade and a separate Ministry for Internal Trade should be formed to develop and regulate the retail trade of India"-said CAIT.
​Mr. Praveen Goel, President, Mr.Ramavtar Verma, Chairman, Mr. Yogesh Singhal, General Secretary, Mr.Vinod Patel, Joint Secretary of All India Bullion, Jewelers,​ Swarankar Federation (AIBJSF) beside CAIT Delhi State President Mr. Ramesh Khanna, Mr. Narender Madan, Chairman,Delhi and Mr. Vijay Pal, General Secretary, Delhi State etc also attended the Press Conference.
CAIT Secretary General Mr, Praveen Khandelwal while releasing the White Paper said that unlike other trade where expenditure is done for consumption but in jewellery business it is payment for investment. This is the precise reason that when we sell jewelry the profit/surplus earned on its sale is taxed as CAPITAL GAINS and not as income from other sources or business income for as individual under income tax laws which is also a central govt enacted law. Thus taxing jewelry is nothing but taxing investments and under Excise Act, the Government has no power to levy excise on investments. There are many products for investment in the Country but excise has not been levied on any investment product, then why only jewellery is chosen for excise-asked Mr. Khandelwal.
He further said that as a matter of principle, the excise is levied on manufacturing of products by machinery​ whereas the jewellery is made by hand process and is a handicraft industry and as such levy of excise on jewellery is in contravention of fundamentals of excise duty. Sale, resale, reconditioning or remaking of old or antique jewellery by the Consumers is an integral part of jewellery business in the Country since ages. Excise is levied on stocks and not on actual sale. Under Excise Act, there is no provision to deal with such articles and this practice having a major share in nature of jewellery business does not allow levy of excise on jewellery trade.
In economic survey 2016, it was stated that the rich people consume 98% of the gold in the Country which is factually wrong and puts a serious question mark on the working of Govt on facts and figures and taking such imaginary figures as the basis of levying excise is a mockery of use of powers vested in the Government. It appears that a wrong picture of the trade is being painted by the administrative machinery to throw indigenous traders out from the trade and bringing global companies in to this trade. The CAIT also regretted that unlike in other Countries, no impact assessment is made before announcing any policy and no consultation takes place with the stakeholders.
Refuting the allegation of black money generation in jewellery trade, the CAIT said that the trader is not the source of black money. It is always the end consumer from where black money generates. Therefore the Government needs to educate Consumers to make more usage of Digital payments rather than using Cash as mode of payment and incentives should be given on usage of Digital payments. We appreciate that the Government has notified guidelines for promoting Digital payments on 29th February. We fully support the Government and call upon to engage Trade Associations in this national drive. To curb black money, the Government needs to make an in depth study of all sources of black money and a comprehensive policy is to be made to plug all such sources. Painting traders singularly as black money generators is uncalled for, highly objectionable and strongly refuted.
​As far as dealing of black money is concerned, Indian Penal Code, Income Tax Act, Excise & Custom Acts, VAT Act already have enough provisions and as such levy of excise on this pretext can not be held justified-said CAIT.