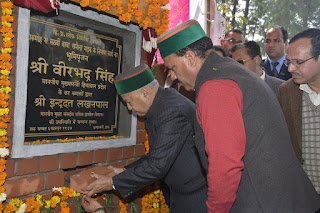 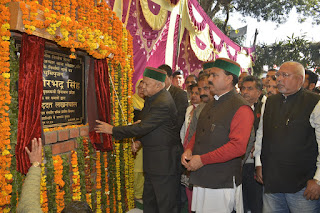 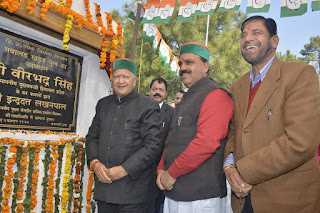 Hamirpur, 18 Feb.  (  Vijyender Sharma                        )  Chief Minister Virbhadra Singh said that we had always invited opposition for co-operation during the assembly sessions and to discuss development and policies for welfare of the masses but it has always been observed, that mostly the BJP MLA's were seen outside the Vidhan Sabha raising slogans against the ruling government rather than sitting inside the house and discussing the important matters. They behave in abnormal manner rather it seems they were not in control of their leader, he said.

He was addressing a massive public meeting at Bijhri in Badsar assembly segment of district Hamirpur today.

He said that in Panchayati Raj elections mandate was given to the congress affiliated candidates by the people of State and it was also a matter of great pride that the women had outnumbered men in these elections. He said that one should be quite polite and decent while in politics. The Congress Governments always worked with decency as opposite to other parties in Himachal Pradesh. He said that it was by chance that he came into the politics and since then his motive and efforts had been to serve the people of the State and ensure their welfare.

He said that those politicians who do not have faith upon themselves, try dividing the people for political benefits. We should be aware of such people, he said adding that those who try to break secular bonding between the people, can not be the true citizens of the country. He said that religion should not be involved in politics and all those who represent people should upkeep the true spirit of secularism. "We should be aware of the venomous attitude of such politicians who try to break the bond of love and peace", he said.

The Chief Minister said that there were only eight villages during the year  1948 which had electricity and today we have 100 per cent villages electrified. He said that we have assured 100 percent drinking water facility to the people of the state. Besides, there were merely 288 kilometers of roads in 1948 and as of today we have a wide network of 35,000 kilometers of roads. Not only this there were few schools during the formation of the State and today there were around 15534 schools and 94 degree colleges. Today our literacy percentage is 82.80 which was merely 7.1 percent in 1948.

The data speaks in volume about the progress the state has made during the past and maximum was done during the successive Congress government regimes.

"I wish Hamirpur to be a education hub of the State and today Hamirpur has number of reputed educational institutions", he said. A medical college was coming up in Hamirpur for which a provision of Rs 190 crore has been made he said. Similarly two more medical colleges were being opened in Nahan and Chamba. Indian Institute of Management was coming up at Dhaula-Kuan in district Sirmaur, and AIIMS in Bilaspur, he added.

He said that recently a decision had been taken in the Cabinet to provide coaching assistance of Rs 30,000 to the Himachali youths, who qualify preliminary exams of civil services conducted through Union Public Service Commission.

Virbhadra Singh said that Rs. 500 crore Skill Development Allowance Scheme was being implemented for skill development of unemployed youth. Under this scheme, allowance of Rs. 1000 per month is being provided to unemployed youth and Rs. 1500 to youth with special abilities. As many as 1,07,887 youth have so far  been benefitted under the scheme, he said.

ANNOUNCEMENTS BY CM AT Bijhri

The Chief Minister announced thirty hand-pumps for Badsar constituency and also announced tarring and metalling of Choa-Dhamani road, Ropri-Balh-Ratnu road, Jol-Kadsai, Nanava, Kanoh, Byad, Khopra road, Garli-Darkoti road, Banni-Garli-Khajjian road and Dadwin-Kharal-Dhangota road.  He said that the other demands as raised, would be certainly considered and announcement would be made in his Budget speech. He assured that all the demands raised would be certainly met after due consideration.

The Chief Minister also laid foundation stone of  the Langar Hall of Shri Baba Balak Nath temple at Deot-Sidh to cost as much as ₹10 crore and inaugurated the temple computerisation cell of the temple which will make all the records of the temple fully computerised besides facilitating on-line 'Darshans' and  'Aarti.'

Chief Parliamentary Secretary, Inder Dutt Lakhanpal, welcomed and honoured the Chief Minister. He also listed the development works undertaken in Badsar constituency and said that a sum of around Rs. 30 crore were being spent on construction of roads and bridges. He said that all the Panchayats in his constituency were benefited in one way or the other by the present Government.  He said that the BJP which boasts of development of  Badsar did nothing in last 15 years and it was proved that two Zila-Parishad seats of Hamirpur were won by the candidates from Badsar and in Panchayati election 80 percent of elected pradhans were from Congress.

Hamirpur, 18 Feb. ( Vijyender Sharma    ) Chief Minister Virbhadra Singh today agreed for up-gradation of Police Station Sujanpur.  He also announced for adequate Budgetary provision for construction of link road  Chamianian di khanouli , construction of bridge over Pung Khud on Khya-Bhatera link road to be included in NABARD, construction of bridge over Pung Khud on Banal Chamiana link road, widening of link road from Ansla  to Khaneu-Kangri,  up- gradation of Police Station Sujanpur, and residential accommodation for  SDM, Sujanpur, besides the Chief Minister assured  for examining the issue regarding exclusion of Darla, Tihra and Dera from Town and Country Planning Act. He assured to look into the demand of starting MCA classes in degree college Hamirpur.

He assured yesterday in a public meeting at Sujanpur to fulfill the demands after due consideration on request of Vice Chairman State Disaster Management Authority Rajinder Rana.