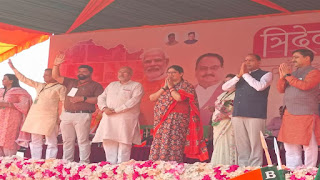 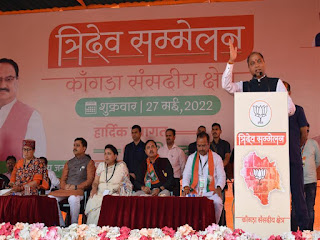 Dharmshala----The state government has accorded top priority for health and social welfare sectors. During the regime of previous government the age limit for availing the benefit of old age pension was 80 years. Present government after assuming the office, in its first cabinet meeting, reduced the age limit to 70 years. Chief Minister Jai Ram Thakur was addressing on the occasion of Tridev Sammelan held at Chambi in Kangra district today. He said the age limit for old age pension has now been curtailed to 60 years.

He said that women of the state had played vital role in empowering the family and society. Even during the peak of  COVID pandemic, women showed their endeavor and came forward to make available lacs of hand-made cloth masks to facilitate the masses. He said the government has also fulfilled its announcement made on the occasion of state-level Himachal Day function held at Chamba and now only 50 percent of the bus fare would be charged from women during intra-state travelling in HRTC buses. The state Cabinet has also accorded its nod.

He said under PM Ujjawala Yojna which was started in the year of  2016, over 1.37 lakh families have been covered, while Mukhya Mantri Grihini Suvidha Yojna has also benefited 3.31 lakh families. Himachal Pradesh has become the first smoke-free  state in the country where every household is having LPG connection now. The Cabinet has also approved free domestic water supply in rural areas and two free LPG cylinders to the beneficiaries of Mukhya  Mantri Grihini Suvidha Yojna.

The state government has accorded the top priority to health care, Mukhya Mantri Sahara Yojna was also launched in 2019 for critical care patients who needed a helping hand. Under the Sahara Yojna, 17,989 patients with such serious ailments have been provided with financial assistance of Rs. 60.50 crore so far, Chief Minister said.