Use of science must be in interest of society: Governor 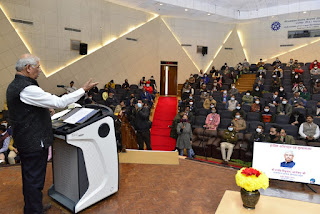 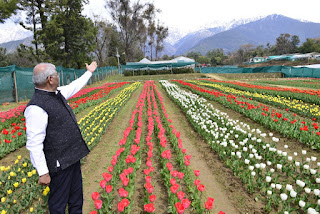 Use of science must be in interest of society: Governor

PALAMPUR---- Governor Rajendra Vishwanath Arlekar said that the real use of science should be in the interest of the society.

The Governor was speaking in a program organized on National Science Day at CSIR- Institute of Himalayan Bioresource Technology, Palampur in Kangra district today.

The Governor said that the world had recognized the scientific discovery of eminent scientist C.V. Raman on this day and the country was proud of the "Raman Effect" given by him.  He said that science was a part of life, even today many scientific discoveries match with the ideas of our ancestors.  "Somewhere our mental slavery compels us to think that this is the research of today itself. But, the research of our sages and saints are equally effective even today, which the world is now accepting", said Shri Arlekar.

He said that we have connected spirituality with science so that science could be used for humanity. He said that it was a prestigious laboratory of the country's leading organization 'Council of Scientific and Industrial Research. The theme of this year's National Science Day was 'Integrated Approach in Science and Technology for a Sustainable Future' and he felt satisfied that this institute has been engaged in this area by developing and disseminating technologies which were relevant to the people of Himachal and other hilly states as well as to the country, he added.

He expressed satisfaction that research work in CSIR-IHBT was being done in the interest of society and most of the researches were dedicated to the farmers.  He said that the society should be benefited by scientific discoveries and that should be the goal of every scientist.

Sanjay Kumar, Director, CSIR-IHBT welcomed the Governor on the occasion and said that the institute would continue to work in the interest of the nation. He said that CSIR-IHBT has a focus to develop technologies for boosting bioeconomy through sustainable utilization of Himalayan bioresources for societal, industrial and environmental benefits. The institute has five major technological platforms comprising of Agrotechnology, Biotechnology, Chemical Technology, Dietetics and Nutrition Technology and Environmental Technology to realize its mandate, he added.

He said that SCImago international ranked CSIR-IHBT at 9th position among 37 CSIR institutes in the country and its parent organisation, CSIR, as the top scientific research institution in the country by the Nature Ranking Index-2020. He added that CSIR-IHBT developed 62 technologies since June 2015 and a total of 481 number of agreements/MoUs were signed during last 6 years. Currently, 50 startups and 17 incubatees were associated with our institute, he said.

He also interacted with the incubatees, start-ups and entrepreneurs. He lauded their efforts by using the technology of CSIR-IHBT, Palampur.

The Governor laid foundation stone of new Laboratory Block of the institute. He also planted sapling of yellow bell plant in the campus. Later, he also inaugurated Tulip Garden.

The Governor also distributed seeds, medicinal plants and improved varieties of plants to the farmers on the occasion

On the occasion, two MoUs were signed for technology transfer in the presence of the Governor. He also released publications of the institute on the occasion.