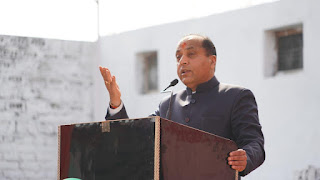 SHIMLA----Chief Minister Jai Ram Thakur has termed  the budget presented by Union Finance Minister Nirmala Sitharaman for the year 2022-23 as an effective document in direction of strengthening country's economy, farmers and employment oriented,  aimed at  welfare of weaker sections of the society besides giving new impetus to development.

The Chief Minister said that this budget would strengthen the developmental infrastructure and at the same time making effective use of digital technology for ensuring holistic and inclusive development process. He said that this budget would prove to be an important document in the direction of making the entire country as well as all the states self-reliant and self sufficient.

Jai Ram Thakur said that the budget would speed up the construction of roads, railways, airports, ports, public transport system, waterways etc. and would also provide pace to development of these sectors in Himachal Pradesh under PM Gatishakti scheme.

The Chief Minister said that in order to increase capital expenditure, additional central assistance to the states has been enhanced by Rs.5,000 crore during the current financial year, out of which Rs.600 crore has been approved by the Government of India in the current financial year for the State. He said that Government of India has decided to increase this assistance to the States by 10 times to Rs. one lakh crore during the year 2022-23. He said that Himachal Pradesh would also benefit from this, as the central assistance would also increase substantially in the coming financial year. Through this assistance, the state government will be given impetus in the implementation of capital works.

Jai Ram Thakur said that the budget also emphasizes promoting zero budget natural farming, which will give more boost to natural farming in Himachal Pradesh. He said that a provision of Rs.60,000 crore has been made by the Central Government for 2022-23 under the Jal Jeevan Mission, which will help the Himachal Pradesh to supply drinking water through pipes to all rural households of the state by July 2022.

The Chief Minister has also welcomed the proposal of starting a new scheme 'Vibrant Village' for rural areas adjoining the international borders. He said that this would ensure development of the border areas of the state. He also thanked the Union Finance Minister for starting a new scheme Parvatmala for the construction of ropeways in the hill states with the assistance of Central Government. He said that State Government has taken up this issue with Union Finance Minister recently. He has welcomed the announcement of the Finance Minister in this budget to start a special facility to speed up grant of forest clearances. He said that this would pave the way for early start of development schemes pending due to forest clearances in the state.

The Chief Minister has also welcomed the proposal to benefit one crore new beneficiaries under the Ujjwala scheme during the year 2022-23. He said that the provision of special assistance for the beneficiaries of Scheduled Castes and Scheduled Tribes in agro-forestry and private forestry is also commendable.

Jai Ram Thakur said that the budget presented for 2022-23 was a document for next 25 years, which would ensure acceleration of development in the coming years in such a way that no one is deprived of its benefits and would ensure participation people from all areas of the country in the process of development, he added.