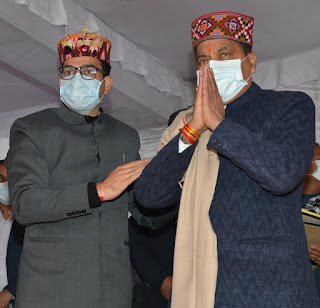 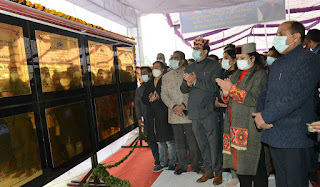 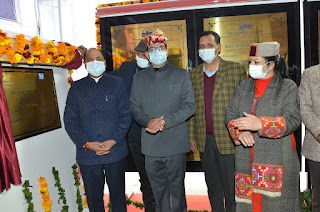 Later, while addressing the people on the occasion, Chief Minister said that the Dharamshala-Mcleodganj Ropeway would go a long way in giving boost to tourism development in the town. He said that despite pandemic, the ropeway was completed within the stipulated time. He said that this project would prove a milestone for providing alternative mode of transport to the tourists as well as general commuters. He said that this ropeway has been constructed by using latest world class technology. He said that the executers of this project to evolve a mechanism to introduce a kind of pass for daily commuters he has asked.

Chief Minister said that the State Government during the pandemic, gave top priority to strengthen health infrastructure in the State. He said that there were only two oxygen plants in the State about two years ago, whereas today as many as 48 oxygen plants were providing best services to patients. He said that Himachal Pradesh became the first state in the country to achieve cent per cent target of first and second dose vaccination of eligible population and also the first state in the country in cent per cent vaccination of 15 to 18 years age group. He said that the increase in number of covid-19 cases was still a matter of concern. He urged the people to ensure covid appropriate behaviour.

Jai Ram Thakur said that under the Chief Minister HIMCARE Yojna 5.13 lakh families have been registered and 2.20 lakh families have been provided financial benefits of about Rs. 200 crore.  He said that under the Ujjwala Yojna of the Centre and Grihini Suvidha Yojna of the State Government, more than 4.69 lakh families of the State have been provided with free gas connections.  He said that recently the Prime Minister Narendra Modi dedicated and laid foundation stones of developmental projects worth Rs 11,500 crore to the people of the State at Mandi on completion of four years tenure of the present State Government.

Chief Minister also distributed laptops to the Patwaris of Revenue department for ensuring efficiency in their functioning.

Member of Parliament Kishan Kapoor said that BJP was synonymous to development as whenever the BJP Government came to power, the State has witnessed unprecedented development in all spheres. He said that the previous State Government went on foundation stone laying spree at the fag-end of its tenure without any budget provisions. He accused the previous State Government for misleading the people of the State with an eye on polls. He said that almost all the government buildings were constructed during the tenure of the successive BJP Governments. He said that special industrial package for the State was provided by the former Prime Minister Atal Bihari Vajpayee which was aimed at giving boost to rapid industrialization in the State. He also thanked the Prime Minister Narendra Modi for selecting Dharamshala town under Smart City Project and Chamba district under aspirational district scheme.