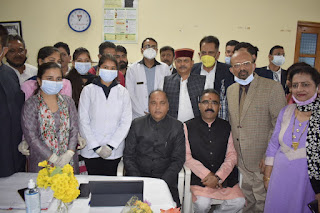 KANGRA------Chief Minister Jai Ram Thakur today boosted morale of the Corona warriors of Family and Health Department by visiting the vaccination centre set up at Tandon Club, Kangra. This vaccination centre created at this club has been working since vaccination drive was launched in the district. This centre has vaccinated over 37,000 persons and achieved the distinction of administering the highest number of vaccines in Kangra district.

Chief Minister told that in Kangra district 19.39 lac doses of the vaccine have been administered so far. He urged the people not to let the reign in the fight against Corona and remain united by following all prescribed norms against this deadly virus. Everyone should follow the simple principle of maintaining social distancing and avoid crowding at public places. All should keep good heed of sanitization and wear mask whenever they go outside.

Jai Ram Thakur hoped that by the end of November, Himachal Pradesh would complete the target of hundred percent vaccination. He said that the State achieved the first position in the country in the first dose of the vaccine and hoped that the State would also maintain its position in the second dose. The residents of hard and difficult geographical terrains like Bara Bangahal and Malana have also been successfully vaccinated through air service and permission of the local deity. No obstacle could hamper the process of development and welfare in the State, he said.

Later, the Chief Minister called on the family members of former Minister and Congress leader GS Bali at his residence at Kangra, who passed away last week at New Delhi. He expressed his sympathy with the bereaved family members. He remembered the services of GS Bali to the State. He said that he was a dynamic and philanthropic personality who worked to mitigate the sufferings of the people not only in his constituency but across the State.

He also visited MLA Pawan Kajal at his house at Sohara near Kangra. Kajal lost his mother a couple of days back. He condoled the death and prayed for the departed soul.