-A Full Court reference was held today in the High Court 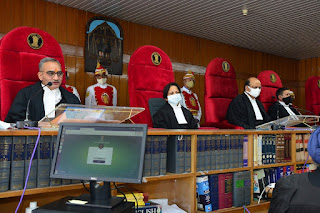 Speaking on the occasion, Hon'ble the Chief Justice Sh. Mohammad Rafiq  said that Justice Sureshwar Thakur has a warm and affectionate nature and a genuine concern for people. He further said that Justice Thakur's  cordial behavior and humility endeared him to the members of the Bar and Bench and his presence will be sorely missed in the High Court of H.P.

On this occasion, Hon'ble Mr. Justice Sureshwar Thakur, Judge  thanked and appreciated Hon'ble the Chief Justice saying that Hon'ble the Chief Justice has the  enviable qualities of deep learning and mature understanding of men and matters. Speaking about the transition in his career,  Justice Sureshwar Thakur shared the famous quote of William Shakespear, encapsulating the changing roles, the human beings have to perform with efflux of time :"All the world's a stage, And all the men and women merely players;…."

Justice Thakur  further said that he feels extremely proud to have been a part of High Court of H.P., as it has robustly stood up to the clarion society call of delivering speedy and  value based justice of the utmost pristine quality.  He encouraged the young member of the legal profession and  advised them to acquire more matured and cutting edge legal skills, by learning  from their seniors and asked the seniors too,  to impart them the finer nuances of legal skills and of Court craft. He asked the Advocates to harness their skills  not only towards the old civil, criminal and revenue laws but also make themselves adept in the recently enacted taxation and corporate laws and now developing laws relating to insolvency, bankruptcy, arbitrations, cryptocurrency etc.

On this occasion, he recalled all those people, who contributed to nurturing and  chiseling of his legal personality, especially his mother Smt.Nirmala Thakur, renowned poetess, his late father, Justice Hira Singh Thakur, his brother, sisters and many others, from Advocate Clerks to the Hon'ble Judges. He appreciated and thanked his brother and sister Judges,  the  H.P. High Court Bar and the staff of the Registry on the occasion.

Justice Sureshwar Thakur was presented Guard of Honour, red carpet and warm send off after the Full Court Reference.