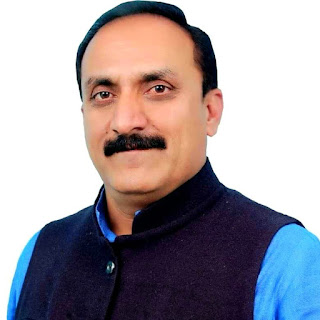 Shimla---- BJP state spokesperson Baldev Tomar said that farmer leader Rakesh Tikait is only trying to spoil the environment in the country and the state.
He said that Rakesh Tikait should clarify which farmer war he is fighting.  If farmers are facing any kind of problem, then these leaders should be give their suggestions in writting to the centre government.
He said that the demand and supply decides the price of apples and not any company, these fake farmer leaders should not try to mislead the farmers of Himachal.
Today, the Prime Minister Kisan Maandhan Yojana is engaged in securing the future of small and marginal farmers, on completion of 60 years of age, farmers with 2 hectares or less landholding will get Rs 3,000 pension every month on their nominal contribution, so far 21.42 lakh  More than more farmers have registered in this scheme.
He also said that small farmers are now being given utmost priority in the agricultural policies of the country. With this spirit, in the last few years, serious efforts were being made to provide convenience and security to these small farmers. Under PM Kisan Samman Nidhi, Rs 1 lakh 60 crore has been given to farmers so far. Out which Rs 1 lakh crore were transferred to small farmers during the pandemic period. More than 2 crore Kisan Credit Cards were issued during Corona persion, most of them to small farmers. Such farmers will be benefitted by the agriculture infrastructure and connectivity infrastructure that is coming up in the country. Initiatives like Food Parks, Kisan Rails and Infrastructure Fund will help small farmers. In the year gone by, more than 6 thousand projects have been approved under the Infrastructure Fund. These steps increase the small farmer's access to market and his bargaining power through FPOs, said the Prime Minister.