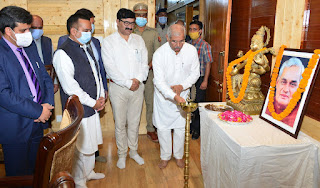 On the occasion, the Governor said that Shri Atal had awakened the spirit of patriotism and it was necessary to remember the virtue of such a patriot so that our future generation could learn something from his ideals. He said that Prime Minister Narendra Modi was working to take forward his ideas. Whether it was representing India in the United Nations or the Pokhran blast, he gave the world a sense of his power on every front and had established the ideal of his culture, civilization and high traditions in the world, he added.

Shri Arlekar said that he was the 'Bhagiratha' of the modern era, who tried to get rid of the drought and floods of the country through river linking projects. In addition, the Golden Quadrilateral was a famous highway in India that connects many industrial, cultural and agricultural cities and this project was also started by Shri Atal Bihari Vajpayee, he added.

"Ataljees birthday is celebrated as good governance day as he believed that governance is for the people. He focused on our foreign policy on non-alignment in the true sense", said Arlekar.

He said that he was a liberal and never gave up on high values in life and as a consensus leader, he established his special identity in the world. However, for many years he remained in the opposition and opposed the anti-people decisions of the government and gave constructive suggestions in the public interest and also praised the good work of the government. He said that he used to mesmerize crores of people with his speeches and his ideology was intensely nationalist, which inspired crores of people devoted to the nation. He said that he often used to say in his speech, "This country is not just a piece of land, but a living nation."

Earlier, the Governor paid floral tributes at the statue of Atal Behari Vajpayee installed in the campus of the University.

Education Minister Govind Singh Thakur said that Atal ji had a special attachment to Himachal. Atal Tunnel was the gift of Vajpayee ji and his memories related to Prini in Kullu District would always be remembered. He never forgot his old friends. He also recalled Shri Vajpayee's relationship with Arjun Gopal, a resident of Thelang village in Lahaul-Spiti and his father Kunj Lal Thakur.

Shri Thakur said that Atal Bihari Vajpayee was a man of tall personality, soft hearted and ideal leader. What should be the harmony between ruler and governance could be learned from the life of Atal ji, he added and said that he had a special attachment to the education sector and his ideal would be helpful in implementing the National Education Policy.

The Special Guest of the program and the General Secretary of BJP, Pawan Rana said that Atal Bihari Vajpayee was a visionary leader and he worked in the interest of the nation by rising above political ideology. He said that he was a man of progressive ideology, who tried to connect the country through rivers and roads. The credit for making the country a nuclear power also goes to him and today we need to follow the path shown by him.

Earlier, the Vice Chancellor of the University Prof. Sikandar Kumar welcomed the Governor and said that he had the privilege of meeting Atal Bihari Vajpayee thrice. He was an educationist as well as a good orator. He recalled the contribution made by Shri Atal Ji to the country as the Prime Minister and said that in the memory of such a legend, his statue has been established in the campus with the cooperation of all.

Registrar HPU Sunil Sharma presented a vote of thanks.

Prof. Arvind Kalia, Dean Studies, other Deans, Director and professors were also present on the occasion.