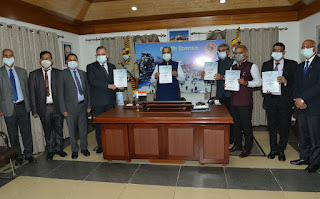 SHIMLA----Chief Minister Jai Ram Thakur released the 'Model Prison Manual-2021' Himachal Pradesh at Oak Over today. The Model Prison Manual emphasizes on the reforms and rehabilitation of prisoners and the prisoners would learn new skills by rightly using sentence period during their confinement. Thus, after their release from jail they can help their family by easily earning livelihood, and would not get attracted towards crime again and become a part of society after rehabilitation and serve as ideal citizen for the country.

Speaking on the occasion, the Chief Minister said that during the DGPs/IGPs conference, held in the year 2020, Prime Minister Narendra Modi and Union Home Minister Amit Shah had directed every State to have a Model State Prison Manual, therefore, the State Police was also directed to draft Model Prison Manual and put in place as soon as possible. He said that the existing Himachal Pradesh Jail Manual 2000, which was about 21-year-old and outdated. He said that a few amendments have been made according to the geographical conditions, diet habits and climatic conditions of the State.

Jai Ram Thakur said that new welfare schemes would be initiated in jails of Himachal Pradesh, in which prisoners would be provided with work and training to earn livelihood according to their skills, capabilities and desire. He said that all the jails would be computerized to achieve transparency. All the jails would be managed through e-Prison Software, which further connected through ICJS system with courts, police and forensic science departments, he added.

Director General of Police Sanjay Kundu, while welcoming the Chief Minister, said that new modern technology and equipment would be used to strengthen the security of the jails of the state.

ADGP Prisons & Correctional Services N. Venugopal said that the jail staff would be trained for the smooth and effective implementation of the provisions of this New Jail Manual. He said that digital Database of prisoners would be prepared in jails so that strict vigil on their movement can be kept during the parole, furlough etc. He said that there were 14 jails in the state, which include 2 central jails, 9 district jails and 3 sub jails.