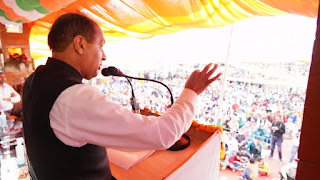 The Chief Minister inaugurated Rs. 377 crore 33 KV sub-station at Lahal for evacuation of around 593 MW of power from hydro projects and for providing alternate source of power in Bharmour area. He said that this sub-station would help in solving the voltage problem of the area. With 400 KV Lahal-Rajera transmission line, Lahaul sub-station would be connected to the national grid at 400 KV level.

He said that the state government had spent about Rs. 161 crore in Bharmour area during the last three and a half years. The pace for construction of 100-bedded civil hospital building at Bharmour had been accelerated and about Rs. 8.85 crore had been spent so far on it.   He said that work on construction of degree college Bharmour building was in full swing and would be completed at the earliest.

Jai Ram Thakur said 26 kilometres of road with an estimated cost of Rs. 69 crore had been constructed in Bharmour sub-division under PMGSY. He thanked the Prime Minister Narendra Modi for providing all possible help to the State to effectively tackle the spread of Covid-19 pandemic. He accused the Congress leaders for politicising even the sensitive issue of this pandemic. He said that Congress in its tenures failed to strengthen health infrastructure in the State. He detailed various welfare and developmental schemes launched by the state government to ensure development and welfare of the state and its people.

He announced upgradation of Sub-Tehsil Holi to Tehsil, opening of Government Primary Schools at Phati-Damtala and Hinda, upgradation of GPS Nikah  to Middle school and Middle school Dhimla to high school. He said that PHS would be opened at Jagat. He announced that a bank branch would be opened at Chchatradi after fulfilling all codal formalities. He said that survey by the Co-operative bank to be conducted soon.