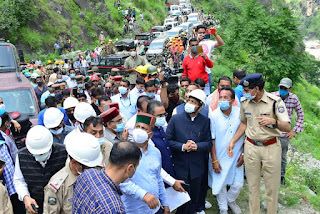 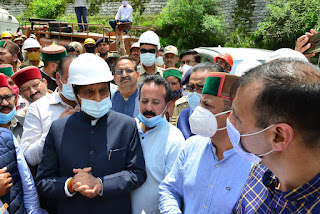 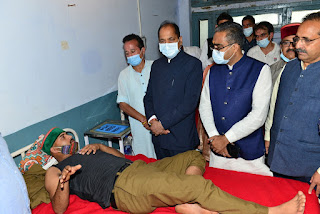 Later, the Chief Minister also visited Community Health Centre Bhawanagar and enquired about the well being of the injured and wished them speedy recovery. He directed the medical authorities to ensure best possible treatment to the injured. He also met the next of kin of the deceased and family members of those missing in this mishap. He assured all possible help from the government.

Jai Ram Thakur said that the State Government would provide rupees four lakh each to the next to the kin of the deceased and Rs 50 thousand to those seriously injured in this tragic incident. He said that Rs one lakh would also be provided to kins of deceased passengers of the bus by the Transport department. He said that free treatment would also be provided to the injured by the State Government.

Chief Minister also appreciated the services provided by the ITBP, NDRF, CISF, State Police personnel and local people in relief and rescue operations. He said that the State Government would also conduct a geological survey of the area as a long term solution.

While presiding over a meeting with the officers at Bhawanagar, Chief Minister directed the officers to make adequate arrangements of boarding and lodging for the rescue teams and the family members of the missing persons as well as the injured. He said that rescue operations should be carried with utmost care so as to rescue all those missing. He also directed the health officers to provide best possible treatment to the injured and immediately shift the seriously injured to the major hospitals.